Cloud-based mobile video-optimization leader, Skyfire, a fully-owned subsidiary of Opera Software, has concluded that more than half (52%) of all videos played on Brazil’s 3G networks suffer from significant stalling and re-buffering, leading to frustrated users and high video abandonment rates. 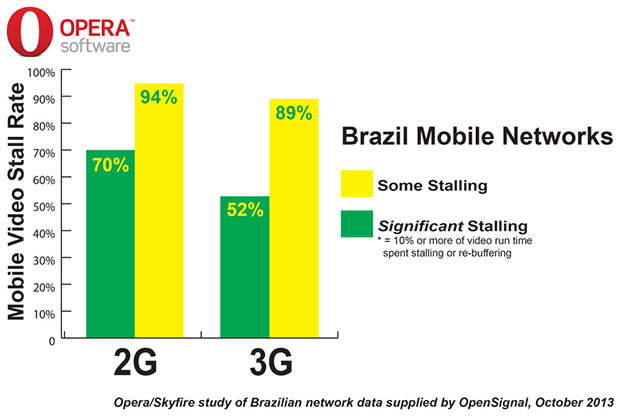 To conduct the study, Skyfire combined its global data on mobile video network loads with bandwidth test data from wireless network authority OpenSignal, using a base month of September 2013 on Brazilian networks.

The data additionally concludes that 89% of all videos across different 3G networks experienced at least some stalling, leading to concern that Brazil’s operators are in urgent need of flexible solutions to prepare their networks for upcoming events such as the 2014 World Cup and the 2016 Summer Olympics taking place in the country.

Skyfire’s data also shows that on Brazilian 3G networks, 41% of all video streams ran at bitrates of less than 300 kbps, a very low speed level for video playback on mobile devices. On mobile devices, HD video requires five to ten times higher bandwidth, and the immensely popular auto-play videos within the Vine and Instagram apps use a much higher bitrate (900-1300 kbps), and therefore will not typically play without frustratingly long start times.

Brazil’s 2G networks fared even worse for mobile video. Over 70% of all videos played on 2G suffered from significant stalling (defined as buffering of 10% or more of overall video playback time), and over 94% of videos experienced at least some stalling.

The new data is noteworthy because Brazil is in a unique position in regard to video consumption on mobile devices. Brazil represents the fourth-largest market for smartphones sold on the planet. Moreover, Brazilians love video, and the growth in over-the-top (OTT) streaming video on those smartphones is tremendous.

“With next year’s FIFA World Cup in Brazil set to drive what will almost certainly be an even greater surge in video, Brazil’s operators clearly don’t have the luxury of time to beef up capacity, and they are under pressure to find more cost-effective solutions,” says Jeff Glueck, EVP, Operator Solutions, Opera Software. “Brazilian operators have the opportunity to couple their regional LTE rollouts with mobile video optimization to expand capacity across 2G, 3G and 4G networks nationwide. Thanks to surgical, cloud-based, NFV (Network Functions Virtualization) – ready solutions now available, like Skyfire’s Rocket Optimizer, Brazil can get this rolled out with plenty of time to spare.”

Skyfire’s Rocket Optimizer mobile video optimization solution, with its unique focus on real-time, cloud-based QoE (Quality of Experience) detection and mitigation for each video stream, is designed to ensure that networks are flexible and elastic enough to withstand the video streaming demands that will be coming in 2014, 2016 and beyond.

Come visit the Opera and Skyfire booth located at #F30 at Futurecom in Rio de Janeiro from October 21-24, 2013.

Skyfire is dedicated to leveraging the power of cloud computing to radically improve the mobile Internet experience for both operators and their consumers.

The company currently counts 4 of the largest mobile operators in the world as customers for its Rocket Optimizer™ and Skyfire Horizon™ solutions.

Skyfire, an Opera Software company, was founded in 2007 and is located in Mountain View, California in the heart of Silicon Valley.

OpenSignal is the global authority on the real world performance and coverage of mobile operators.

Whilst other methods attempt to approximate or model network performance, OpenSignal directly measures it. OpenSignal’s data is sourced from over 5 million users of its mobile app, providing a direct window into the true experience on mobile networks.