Thanks to Opera’s advanced compression technology, Indian users of the Opera Mini mobile browsers used 75% less mobile data in the first half of the year, according to a report by Opera Software. This is the equivalent of a monthly nationwide saving of Rs 350 million and adds up to a whopping saving of Rs 2.1 billion in the first six months of 2014.

The report is based on aggregated information obtained from the Opera Mini servers.

Opera Mini is compatible with over 3000 mobile devices, ranging from basic Java phones to the latest Android and iOS smartphones. This makes it highly popular in the Indian mobile market, which has a healthy mix of consumers using a large variety of handsets. India is also home to the largest number of Opera Mini users in the world.

These substantial savings were achieved thanks to Opera Mini’s advanced compression technology, which shrinks webpages down to as little as 10% of their original size, reducing data consumption by up to 90%. The data compression also helps render webpages faster, even while roaming, or in places with poor network conditions, making Opera Mini a great companion while on the go.

Investing in good technology helps users save money. In the case of Opera Mini, the technology is simply free. Users of the browsing app need only do what they do every day – surf the web with their mobile phones – and Opera Mini will save them money.

Daily savings can add up in the long run. The 2.1 billion rupees that Opera Mini users in India saved over just half the year could be used for: 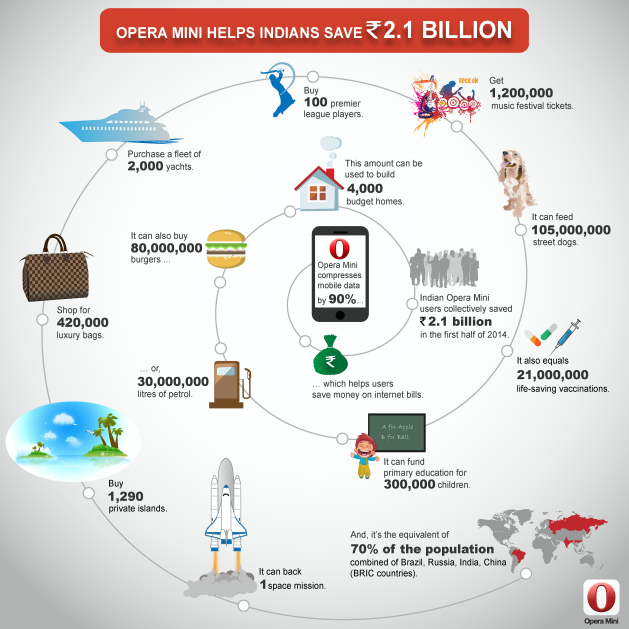 “We understand how precious mobile data is for Indian consumers, and that’s why our servers work very hard to shrink every bit of data possible for Opera Mini users. It’s indeed gratifying to see that this translates into such gigantic savings for our Indian users. This is, however, only the tip of the iceberg. We are confident Opera Mini can help Indians save billions more”, says Sunil Kamath, Vice President for Southern Asia at Opera Software.