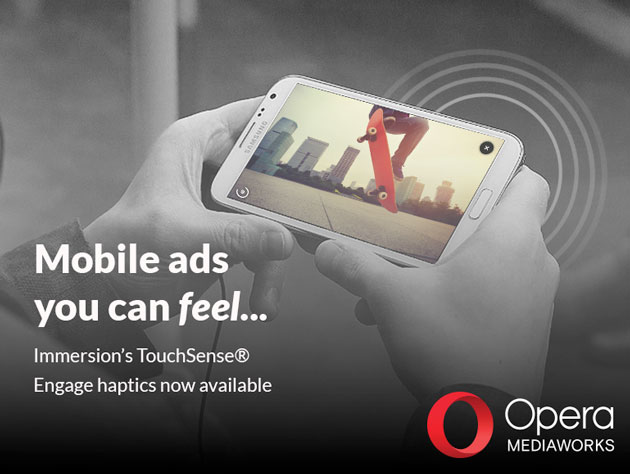 Stoli® Vodka, is the first brand to leverage touch-enhanced advertising on Opera Mediaworks’ platform through its media agency Horizon Media. Its latest mobile advertising campaign features tactile effects to complement the ad creative as part of its ongoing ‘Stoli: THE Vodka’ campaign – an animation with a woman shaking a Stoli vodka martini. The campaign is currently running in LDA-compliant Android apps on the Opera Mediaworks platform that are embedded with the company’s SDK. The mobile video ad, which is being executed on both smartphones and tablets, includes a signature haptified bumper at the beginning, “Enhanced with TouchSense Effects,” to inform users that this ad will feel different than the average video ad.

To experience the ad, see the video here.

“Haptic feedback is no longer a simple buzz, or a mere notification of a message,” says Mike Owen, EVP, North America Sales, Opera Mediaworks. “With sophisticated haptic effects, a series of unique vibrations can evoke real-world meaning, like the thumps of a heartbeat or the feel of an approaching car – which is a significant new creative capability for advertisers. We are excited to offer it on our mobile ad platform.”

“With the help of Opera Mediaworks’ distribution and network, tactile video advertising now reaches more than a million users daily,” says Jason Patton, VP and GM of Content and Media at Immersion. “Through the expansion of TouchSense technology in advertising, we’re taking another step in promoting the broad adoption of touch in media on mobile devices and enabling a richer, more interactive experience for consumers. Consumer focus groups conducted by Immersion show that media enhanced with tactile effects result in an increased feeling of immersiveness, intent to buy and brand recall.”

“A pioneering heritage is deeply engrained in the Stoli Vodka brand as the first vodka in the U.S. and first vodka to bring flavors to market,” says Russ Pareti, Brand Director at Stoli Vodka.  “Being the first brand to leverage Opera Mediaworks and Immersion’s technology as part of our ‘Stoli: THE Vodka’ campaign continues this tradition.  We are always seeking new ways to engage with our millennial consumers and to connect with them via mobile advertising; not only will viewers watch a woman shake our Stoli Martini, they’ll be able to actually feel the martini being made.”

“Stoli is an innovative and pioneering advertiser that is known to grab consumer’s attention with bold messaging,” says Alex Stone, Director of Digital Activation at Horizon Media. “With haptic feedback technology we can create even more engaging brand experiences on Android devices for consumers to improve brand recall and awareness,” continues Sarah Bachman, VP, Mobile Strategy at Horizon Media.

Immersion’s TouchSense Engage is easily deployed in mobile apps through a simple technology integration that enables the media to control the actuator, the vibration motor in a mobile device. The Opera Mediaworks’ SDK utilizes TouchSense Engage to manage haptic synchronization with its Instant-Play™ HD mobile video via a small library plug-in. To learn more about how to enable in-app haptic playback on the Opera Mediaworks platform, visit this link.

Founded in 1993, Immersion (NASDAQ: IMMR) is the leading innovator in haptic technology. The company’s touch feedback solutions deliver a more compelling sense of the digital world. Using Immersion’s high-fidelity haptic systems, partners can transform user experiences with unique and customizable touch feedback effects; excite the senses in games and videos; restore “mechanical” feel by providing intuitive and unmistakable confirmation; may improve safety by reducing distractions while driving; provide realistic touch feedback when performing robotic medical procedures and training simulations; and expand usability when audio and visual feedback are ineffective. Immersion’s technology has been adopted in 3 billion digital devices, and provides haptics in mobile phone, automotive, gaming, medical, and consumer electronics products from world-class companies. With over 2,000 issued or pending patents in the U.S., China and other countries, Immersion helps bring the digital universe to life. Learn more at www.immersion.com or www.touchsense.com. About Stoli Group® USA, LLC Stoli Group® USA, LLC is the North American subsidiary of SPI Group, recognized globally for pioneering heritage and the outstanding Stolichnaya® brand of premium vodkas. Since its inception in 2014, Stoli Group USA already boasts one of the largest domestic distribution networks in the U.S. and is a growing distributor of premium spirits, led by the flagship Stoli® Vodka Brand, its category-leading flavors including Ohranj®, Razberi®, Vanil®, Citros™, and the ultra-premium luxury vodka elit™ by Stolichnaya®. In October 2015, Stoli Group USA announced an exclusive distribution partnership with the best-selling American craft rum, Bayou Rum®. Considered a trailblazer in the vodka industry, Stolichnaya vodkas are bottled in Latvia and define the benchmark for quality with meticulously crafted liquid that meets the highest Alpha Spirit standard.

Horizon Media, Inc. is the largest and fastest growing privately held media services agency in the world. The company was founded in 1989, is headquartered in New York and has offices in Los Angeles, San Diego, and Chicago. Horizon Media was chosen as 2011 Independent Media Agency of the Year by Mediapost, 2010 U.S. Media Agency of the Year by Adweek, Brandweek, and Mediaweek as well as by Ad Age and as one of the world’s ten most innovative marketing and advertising companies by Fast Company in 2011. In 2012, Bill Koenigsberg, President, CEO and Founder, was honored by Advertising Age as Industry Executive of the Year. Most recently, in 2014, Bill Koenigsberg was named 4As Chair of the Board and is the first person from a media agency to hold this prestigious position in the 100 year history of the 4As, the marketing industry’s leading trade association. The company’s mission is “To create the most meaningful brand connections within the lives of people everywhere.” By delivering on this mission through a holistic approach to brand marketing, Horizon Media has become one of the largest and fastest-growing media agencies in the industry, with estimated billings of over $5.3 billion and over 1,200 employees. The company is also a founding member of Columbus Media International, a multi-national partnership of independent media agencies. For more information, please visit horizonmedia.com.

Immersion’s actual results might differ materially from those stated or implied by such forward-looking statements due to risks and uncertainties associated with Immersion’s business, which include, but are not limited to: unanticipated difficulties and challenges encountered in product development efforts (including with respect to TouchSense Technology) by Immersion and its licensees; unanticipated difficulties and challenges encountered in implementation efforts by Immersion’s licensees; adverse outcomes in any future intellectual property-related litigation and the costs related thereto; the effects of the current macroeconomic climate; delay in or failure to achieve commercial demand for Immersion’s products or third party products incorporating Immersion’s technologies; and a delay in or failure to achieve the acceptance of touch feedback as a critical user experience. Many of these risks and uncertainties are beyond the control of Immersion.

For a more detailed discussion of these factors, and other factors that could cause actual results to vary materially, interested parties should review the risk factors listed in Immersion’s most current Form 10-K and Form 10-Q, both of which are on file with the U.S. Securities and Exchange Commission. The forward-looking statements in this press release reflect Immersion’s beliefs and predictions as of the date of this release. Immersion disclaims any obligation to update these forward-looking statements as a result of financial, business, or any other developments occurring after the date of this release.

The use of the word “partner” in this press release does not mean a legal partner.

Immersion, the Immersion logo, and TouchSense, are trademarks of Immersion Corporation in the United States and other countries. All other trademarks are the property of their respective owners.