Unlimited downloads of premium apps and games for VND 10,000 a week

Mobile data subscribers can now download as many premium apps and games as they want for a small weekly subscription fee of VND 10,000 (USD 0.45). Viettel, the largest operator in Vietnam, has partnered with Opera to launch AppMarket, an “all-you-can-eat” app storefront for Android, Java, BlackBerry and Symbian users. It offers the lowest weekly app subscription plan in the nation. 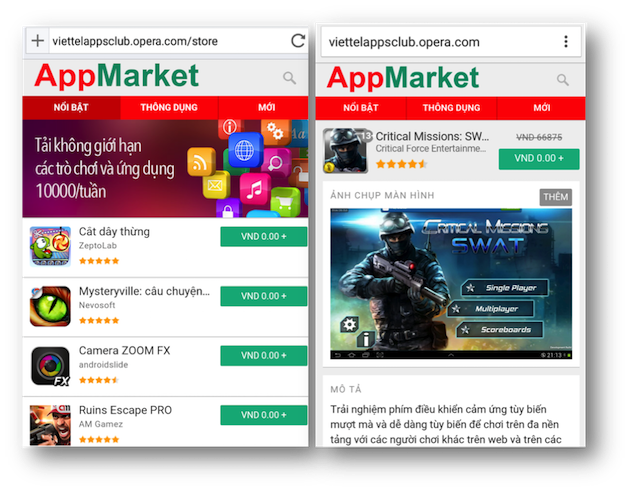 AppMarket, powered by the Opera Mobile Store, offers best selection of popular titles from more than 300,000 apps and games, including popular paid game titles such as Critical Missions: SWAT, Dirt Bike Apocalypse, Cut the Rope and Vampireville: Hidden Object. AppMarket subscribers will be able to download thousands of paid apps and games – as many as they want – for one low price.

Viettel’s AppMarket makes it possible for its subscribers to purchase paid apps and games without using a credit card. The customer simply sends “DK AM” to 5050 via SMS or by confirming his or her online subscription at viettelappsclub.opera.com/store. The subscription plan will be renewed automatically every week. Subscribers can cancel their subscriptions at any time before the new subscription period starts.

“Mobile internet users in Vietnam have shown a strong interest in mobile stores, games and social-media content. Nearly 8 in 10 ad impressions through Opera Mediaworks are served to these three categories,” says Viet Anh Nguyen, Country Manager for Vietnam at Opera. “With more people migrating to smartphones, AppMarket will cater to their needs for premium apps and games.”

“AppMarket is the most affordable and convenient way to purchase paid apps and games for mobile internet users in Vietnam,” says Phạm Thanh Phương, Vice Director of CSP Center at Viettel. “Our customers will be able to download their favorites, without breaking the bank. This subscription model saves consumers a lot of money and effort compared to buying apps one by one.”

This subscription model will also help strengthen Vietnam’s mobile-app development ecosystem. It provides increased marketing and monetization opportunities for both Vietnamese app developers and operators. Powered by the Opera Mobile Store, the third-largest mobile app store in the world, AppMarket has already attracted 174 Vietnamese app and game developers. The store helps them extend their reach to more users and generate revenue.

Opera takes care of the app store’s operations and administration on Viettel’s behalf, constantly rotating and refreshing the apps in the store, with a steady stream of new apps being created and added every week by thousands of app developers.

Viettel’s AppMarket is a web-based app and game storefront. Users can access the store at viettelappsclub.opera.com/store with Opera and other browsers.

Viettel Telecom is the leading mobile operator with 50 million subscribers. Viettel keeps being the leading telecommunication enterprise and state-owned economic group with occupation of 12% and 23% of revenue and profit respectively created by 1.000 state-owned enterprises.

With a huge customer-base throughout the country and investment into 3G network expansion and improved quality, Viettel has continuously exceeded standards. Viettel is committed to providing the best quality services possible to its large and growing subscriber base.