Rovio, the creator of Angry Birds, has partnered with Opera to bring Rovio’s family of games to the Opera Apps Club service. 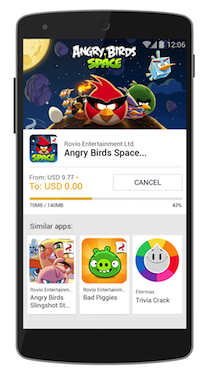 Opera Apps Club is an innovative subscription-based, “Netflix-style” service for distributing mobile apps. Users of Opera Apps Club get unlimited downloads and usage of top premium apps through a monthly or weekly subscription fee that is payable through the operator.

“Opera Apps Club is all about helping users discover the best apps and games, and we are excited to bring some of the most popular titles from Rovio to our catalog, enhancing the subscriber’s experience with the service,” says Pedro Ripper, CEO of Opera’s fully-owned subsidiary, Bemobi.

For users, especially those in emerging markets where credit- and debit-card penetration remains low, Opera Apps Club offers users a new and exciting way to access premium apps, that would otherwise be out of reach, on their mobile devices.

For the carrier, Opera Apps Club helps create additional revenue from apps and, more importantly, places the carrier back at the heart of app distribution for users. This is especially true for carriers that are experiencing high growth in smartphone usage.

With over six million active subscribers, Opera Apps Club provides an effective channel for app developers, through which they can get their apps discovered and monetized across the globe.

The Opera Apps Club service, originally available throughout Brazil and Latin America in partnership with 34 wireless carriers and two smartphone OEMs, will continue to roll out globally this year.

Rovio Entertainment Ltd. is a global entertainment media company. Headquartered in Finland and with studios across the world, Rovio is the creator of Angry Birds™, the casual mobile game that changed an industry and became an international phenomenon. Today Angry Birds is not only the most downloaded game of all time, it is a renowned entertainment brand that has branched out into animation, licensing and more. The Angry Birds Movie is slated for release in May 2016. www.rovio.com.