Opera Mediaworks, the world’s highest quality mobile advertising and marketing platform, and Immersion Corporation (NASDAQ:IMMR), the leading developer and licensor of haptic technology, today announced a new mobile advertising campaign for Lexus that is enhanced with Immersion’s TouchSense® technology. Lexus, in partnership with its advertising agency Team One, has launched a haptic ad campaign for the first-ever Lexus GS F that currently runs on Opera Mediaworks-enabled Android mobile apps in the United States. Team One, Immersion and Opera Mediaworks worked together to enhance the Lexus mobile ad with sophisticated tactile effects to capture how it feels to drive the most powerful Lexus sedan. 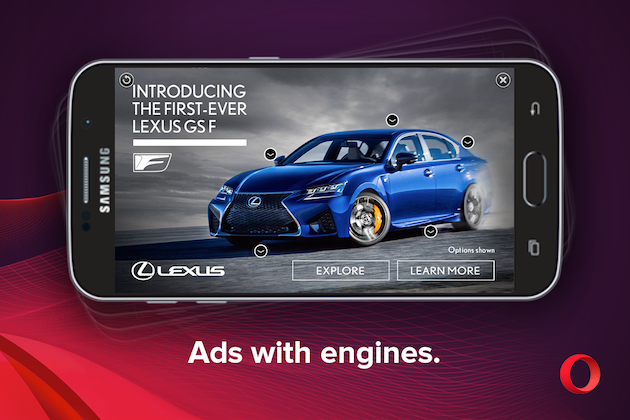 “Haptics technology brings sight, sound, motion and feeling to the mobile user, and with Opera Mediaworks and Immersion, we brought the roar of the Lexus GS F’s 467-horsepower engine to life,” said Jennifer Bolt, Executive Director, Idea Communication, Team One. “Users will feel the power of the GS F as the phone vibrates during action moments while the video plays.”

”Haptics in advertising is an up-close, personal experience where brands can literally touch the consumer,” said Paige Raynes, Director of Content Operations at Immersion. “Together we created a one-of-a kind haptic mobile ad that best represents the Lexus brand for the Lexus GS F. TouchSense technology provides the ability to creatively author tactile effects to add meaning and depth to content viewed on mobile.”

“We’ve seen great early results from utilizing haptics in conjunction with video, as it allows brands to deliver an experience that now isn’t just seen and heard, but felt,” adds Mike Owen, EVP, North American Sales, Opera Mediaworks. “This is taking advertising to a new place – one that only mobile can deliver.”

The full campaign can also be viewed here.

Founded in 1993, Immersion (NASDAQ: IMMR) is the leading innovator in haptic technology. The company’s touch feedback solutions deliver a more compelling sense of the digital world. Using Immersion’s high-fidelity haptic systems, partners can transform user experiences with unique and customizable touch feedback effects; excite the senses in games and videos; restore “mechanical” feel by providing intuitive and unmistakable confirmation; may improve safety by reducing distractions while driving; provide realistic touch feedback when performing robotic medical procedures and training simulations; and expand usability when audio and visual feedback are ineffective. Immersion’s technology has been adopted in 3 billion digital devices, and provides haptics in mobile phone, automotive, gaming, medical, and consumer electronics products from world-class companies. With over 2,100 issued or pending patents in the U.S., China and other countries, Immersion helps bring the digital universe to life. Learn more at www.immersion.com.

Lexus launched in 1989 with two luxury sedans and a commitment to pursue perfection. Since that time, Lexus has expanded its line-up to meet the needs of global luxury customers. Lexus is now going beyond its reputation for high quality vehicles with the integration of innovative technology, emotional exterior and interior designs, and engaging driving dynamics and performance.  With six models incorporating Lexus Hybrid Drive, Lexus is the luxury hybrid leader. Lexus also offers seven F SPORT models and two F performance models.  In the United States, Lexus vehicles are sold through 236 dealers who are committed to exemplary customer service.

Immersion’s actual results might differ materially from those stated or implied by such forward-looking statements due to risks and uncertainties associated with Immersion’s business, which include, but are not limited to: unanticipated difficulties and challenges encountered in product development efforts (including with respect to TouchSense technology) by Immersion and its licensees; unanticipated difficulties and challenges encountered in implementation efforts by Immersion’s licensees; adverse outcomes in any future intellectual property-related litigation and the costs related thereto; the effects of the current macroeconomic climate; delay in or failure to achieve commercial demand for Immersion’s products or third party products incorporating Immersion’s technologies; and a delay in or failure to achieve the acceptance of touch feedback as a critical user experience. Many of these risks and uncertainties are beyond the control of Immersion.

For a more detailed discussion of these factors, and other factors that could cause actual results to vary materially, interested parties should review the risk factors listed in Immersion’s most current Form 10-K and Form 10-Q, both of which are on file with the U.S. Securities and Exchange Commission. The forward-looking statements in this press release reflect Immersion’s beliefs and predictions as of the date of this release. Immersion disclaims any obligation to update these forward-looking statements as a result of financial, business, or any other developments occurring after the date of this release.

The use of the word “partner” in this press release does not mean a legal partner.

Immersion, the Immersion logo, and TouchSense, are trademarks of Immersion Corporation in the United States and other countries. All other trademarks are the property of their respective owners.