OSLO, Norway – January 22, 2018 – Cryptocurrencies, like Bitcoin, have become a hot topic and, with their surge in value, so has the mining for new coins, known as cryptocurrency mining. While some use their own data centers, many web developers are increasingly using people’s computers and smartphones for this – often without their consent. The phenomenon is estimated to be affecting more than a billion people worldwide, causing their devices to run warm, become slower and eat up their batteries.

Opera recently became the first major browser to add protection against cryptocurrency mining scripts to its desktop products. Today, Opera launches the feature in all its mobile browsers, protecting hundreds of millions of smartphone browser users.

“When you browse the web, there are no visual clues that your device is exposed to mining,” says Jan Standal, VP Product Marketing at Opera “A single webpage you visit can take up to 4.5 hours of your battery time, if you keep the tab open. This often turns out to be just the battery time you needed to use a ride-hailing app or check the map to get home”. 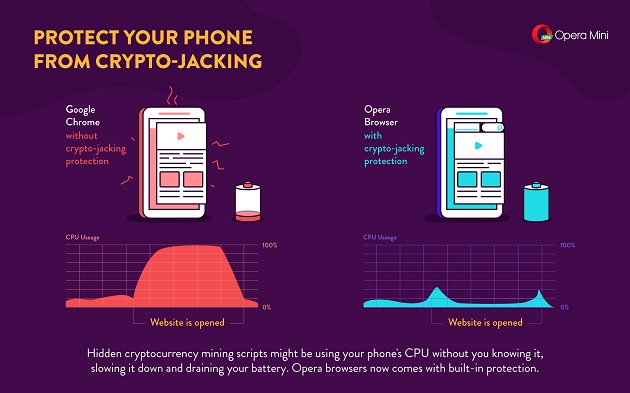 According to some reports, there are currently more than 3 million websites exposed to cryptojacking, so the need for extra protection is bigger than ever. By blocking mining scripts, Opera ensures that its users’ smartphones continue to run smoothly and that they have enough battery life for the things they really want or need to be doing.

How does it work?

The new anti-cryptocurrency mining feature is activated by default when enabling the ad blocker on Opera Mini and Opera for Android. The ad blocker can be enable in “Settings”, and it will automatically detect and stop the mining scripts written into the coding of a webpage.

Check whether your browser is affected by cryptocurrency mining

To make it easier for you to tell whether your browser is affected by unwanted crypto mining, we have created a website which safely checks just that. Simply go to www.cryptojackingtest.com on your mobile or desktop browser to see if your device is impacted by mining.

After several tests of the Opera browsers for smartphones performed on Samsung Galaxy S8 and HTC One, developers at Opera determined that scripts mining for cryptocurrencies can increase the smartphones’ CPU usage up to 100 percent. This can cause increased battery draining and make the phone overheat.

After testing Opera Mini and after activating the ad blocker on Opera for Android, we found that some phones were able to recover 100% of their CPU usage.