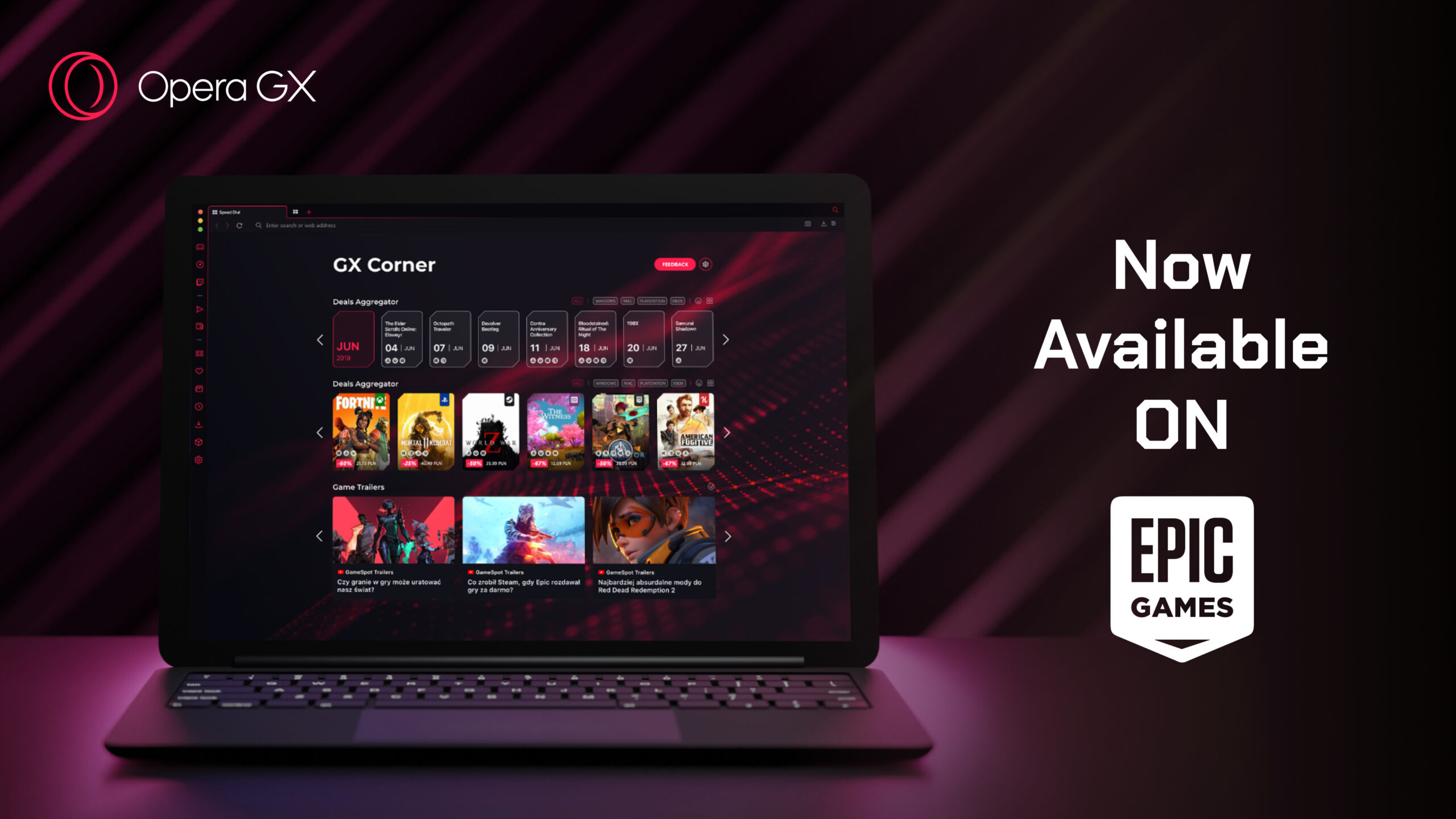 Oslo, January 26, 2022 – Opera GX [NASDAQ: OPRA] joins the Epic Games Store, becoming the first web browser for gamers available in the store. With its set of unique features including RAM, CPU and network bandwidth limiters, as well as a unique, gaming-themed look and feel including adaptive background music, Opera GX is the perfect fit for players in the Epic metaverse. Players also get access to GX Corner, a unique Opera GX feature with a game release calendar, information about games on sale and gaming-news.

With Opera GX, Opera has adapted its proven, innovative web browser to expand its footprint in gaming. Opera GX brings the immersive gaming experience to browsing, as the first browser to include built-in Twitch, Discord and social messengers. GX also supports dynamic RGB Lighting Effects on Razer and Corsair peripherals. GX’s Discord community is the biggest server in the tech category with an  audience of 500K members.

“Since its launch, the Epic Games Store has become a true destination for online game and software distribution, giving gamers much-needed choice with access to multiple game platforms. At Opera, our mission is to create superior products that people choose to use and install. This mission has led to the development of Opera GX, the browser of choice for gamers, who decide to make it default for its superior features, look and feel. Opera GX is the perfect fit for the Epic Games Store because of this shared passion to create choice and enable a community of gamers,” said Annette de Freitas, Head of Business Development at Opera Gaming.

Launched in 2018 by the studio behind Fortnite, Epic Games Store connects 62 million monthly active gamers to the titles they want. Opera GX is available to download for Windows and Mac from Epic Games Store under this link.

Opera is a global web innovator. Opera’s browsers, news products and fintech solutions are the trusted choice of hundreds of millions of MAU worldwide. Opera is headquartered in Oslo, Norway and listed on the NASDAQ stock exchange (OPRA). https://opera.com

In 2018, Opera became the first browser to add Web 3 support and a built-in crypto wallet. In 2019, Opera launched Opera GX, which has seen tremendous growth over the past year with a user base of more than 13 million highly engaged monthly active gamers. Opera GX continues to receive high ratings (4.7 out of 5.0), and its Discord server quickly became number one in the Science & Tech community with 500K members. In June 2021, Opera GX became available on mobile devices as the world’s first mobile browser designed for gamers. In January 2021, Opera acquired YoYo Games, the developer behind GameMaker Studio 2.

Founded in 1991, Epic Games is an American company founded by CEO Tim Sweeney. The company is headquartered in Cary, North Carolina and has more than 40 offices worldwide. Today Epic is a leading interactive entertainment company and provider of 3D engine technology. Epic operates Fortnite, one of the world’s largest games with over 350 million accounts and 2.5 billion friend connections. Epic also develops Unreal Engine, which powers the world’s leading games and is also adopted across industries such as film and television, architecture, automotive, manufacturing, and simulation. Through Unreal Engine, Epic Games Store, and Epic Online Services, Epic provides an end-to-end digital ecosystem for developers and creators to build, distribute, and operate games and other content.