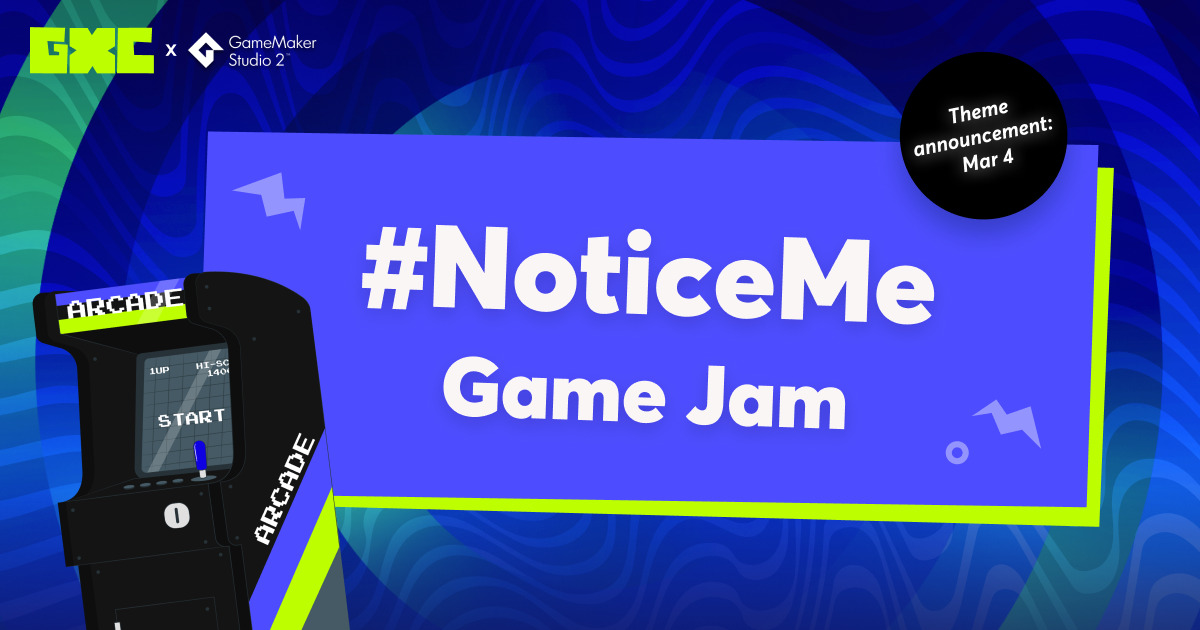 #NoticeMe Game Jam to give away $33,000  in prize money and immortalise winners in a one-of-a-kind arcade machine. Winners to be announced by gaming YouTube superstar PewDiePie.

22 February 2022, Dundee, Scotland and Oslo, Norway – Opera and GameMaker are excited to announce the #NoticeMe Game Jam, which will take place from March 4th to March 18th, with the winners being announced by gaming YouTube superstar PewDiePie on his channel. Game developers who take on the challenge have the chance to win prizes from a $33,000 cash pool as well as the unique opportunity to have their game uploaded into a physical arcade cabinet and played by gamers worldwide!

The #NoticeMe Game Jam theme will be revealed on March 4th, kicking off a two-week window for developers to create and perfect their games. At their disposal is the powerful, free-to-use GameMaker Studio 2 software, the engine behind indie greats such as Undertale and Hotline Miami. Once completed, their games will be uploaded to Opera’s self-publishing platform GXC, currently home to over 600 free games for Opera GX browser users.

“With the #NoticeMe Game Jam, we want to encourage the GameMaker community to submit their games onto GXC, not only to reach Opera GX’s growing user base but also for the opportunity to see their work immortalised in a custom-made arcade cabinet,” said Russell Kay, head of GameMaker.

Once the submission period has ended, the top 10 games will be chosen by an expert panel of judges from Opera GX and GameMaker. After the finalists have been selected, their fate will be in the hands of the public, who will vote for the five best games. It will be the gamers who ultimately decide which titles make it into three physical arcade machines placed in video game museums, barcades and universities around the world and win cash prizes from a $24,000 pool.

Additional prizes are up for grabs, with the #NoticeMe Game Jam shining the spotlight on artists and designers. The ‘Best Cover Image’ category gives $1,000 each to the two games with the best cover art, and a further $7,000 is on the line based on soon-to-be-revealed factors.

The #NoticeMe Game Jam starts on March 4th. Interested competitors can sign up to the jam here and follow GameMaker and Opera GX on Twitter to stay up to date on the latest information.

Opera is a global web innovator. Opera’s browsers, news products and e-commerce solutions are the trusted choice of hundreds of millions of MAUs worldwide. Opera is headquartered in Oslo, Norway and listed on the NASDAQ stock exchange (OPRA). https://opera.com

In 2019 Opera launched Opera GX, a browser built for gamers with features that include countless customization options, sound effects, background music, a gaming-inspired design, as well as CPU, RAM and Network Bandwidth limiters that make the browser less resource-hungry and leave more of the computer’s resources for gaming. Opera GX has seen tremendous growth over the past year with a user base of more than 10 million highly engaged monthly active gamers. Opera GX’s user base continues to grow at a fast pace. Opera GX continues to receive high ratings (4.7 out of 5.0). Its Discord server quickly became number one in the Science & Tech community with hundreds of thousands members. In June 2021, Opera GX became available on mobile devices as the world’s first mobile browser designed for gamers.

GameMaker Studio 2 is the fastest and friendliest cross-platform game development technology out there. GameMaker Studio 2 has been completely redeveloped with usability and efficiency at its core, allowing artists and game creators to make games within a single code base and then publish them to run natively across multiple platforms including Android, iOS, HTML5, PlayStation, Xbox, Nintendo Switch, Windows Desktop, OS X, Ubuntu, Windows UWP. The GameMaker family of products is offered by YoYo Games, a wholly owned Opera subsidiary. GameMaker has been downloaded more than 10 million times since 2012. The team behind it is based in Dundee, Scotland.