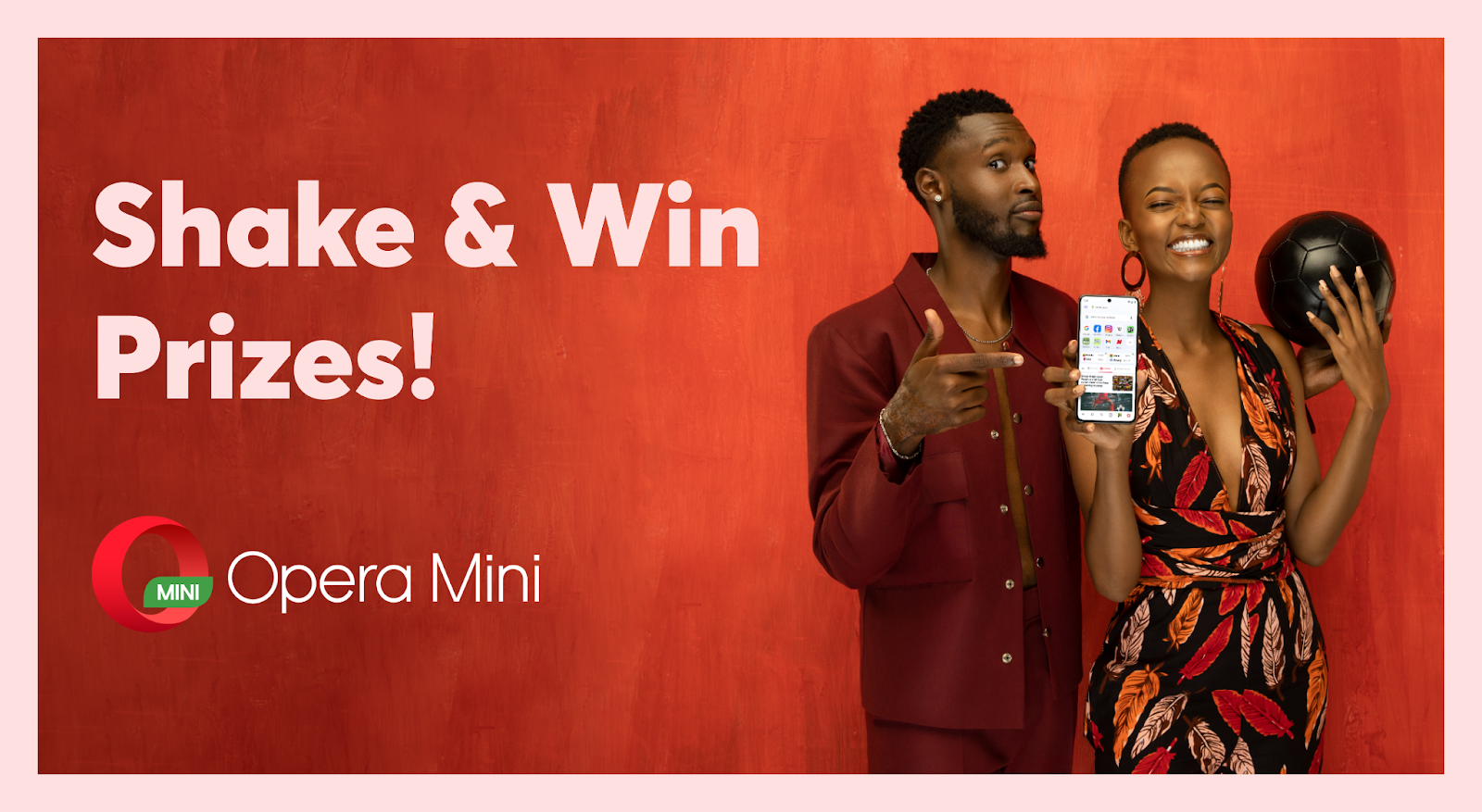 Oslo, Norway – November 22, 2022  – Opera – the company behind the popular data-saving Opera Mini browser, which has over 100 million users across Africa – is announcing its “Shake and Win” campaign. Dedicated to football’s greatest celebration, the World Cup, over $300,000 in prizes headline the contest.

Just in time for the upcoming tournament, Opera has updated its Opera Mini browser with new football related features and games right inside the popular browser. With the in-app “Shake and Win” game, Opera Mini football fans will have the chance to become part of the winning team during this football season. To participate, users only need to shake their phones to have a chance at winning daily prizes. Opera has also updated the Opera Mini browser to display live scores for every match so that users don’t miss a single goal, and created a Predictor game that offers further prizes for those who are ready to test their football knowledge by correctly entering the scores for group stage matches.

“It is again time to celebrate the biggest football feast of 2022. We know a big part of our user base loves football, so we’ve taken a multi-faceted approach to celebrating with them by providing live scores at their fingertips, and allowing users to win valuable prizes simply by shaking their phone,” said Jørgen Arnesen, EVP Mobile at Opera.

Opera has always shared a passion for football with Opera users, bringing football-focused products to the market such as the Apex Football app and website, which now has over 12M users. As a continuation of Opera’s excitement about the game, it’s kicking off the “Shake and Win” campaign to celebrate the World Cup. Going live on November 20th and available until the end of the tournament, the contest will allow everyone to enjoy the World Cup no matter where they are by giving them the chance to win prizes including airtime by popular providers (including MTN, Safaricom, Airtel, and AirtelTigo and many more), cash prizes and brand-new phones.

Starting the 20th of November, users can access the Shake and Win campaign page from either Opera Mini, Opera for Android or Apex Football via the floating button on the start page, or through visiting the official website. From there, users are invited to shake their phones for a chance to win either a puzzle piece to win one of the major prizes or an immediate prize. To win one of the major prizes such as a brand-new phone, users must collect six individual puzzle pieces to complete their prize puzzle.

Updates for the real fans

In addition to Shake and Win, Opera has also launched the Predictor game so that fans can more closely participate in the football fun. As with Shake and Win, users can access the Predictor game through designated sections within Opera Mini and Apex Football. Once at the landing page, users are invited to enter their predictions for six selected group stage matches. If they can enter each score with 100% accuracy, they are eligible to win up to $10,000 every round.

Estimating the scores could also be made easier through a final innovation – the addition of live scores to the Opera Mini homepage, just in time for the start of the action. So rather than jump to a different site, the latest update of Opera Mini enables fans to keep up with the latest developments right in the browser.

To join the football celebrations with Opera Mini download the app for free from the Google Play Store.

Opera is a global web innovator with an engaged and growing base of hundreds of millions of monthly active users who seek a better internet experience. Building on over 25 years of innovation that started with browser products, Opera is now leveraging its brand and highly engaged user base in order to expand its business into new segments. Today, Opera offers users around the world a range of products and services that include PC and mobile browsers, the newsreader Opera News, and apps dedicated to gaming, e-commerce, and classifieds. Opera is headquartered in Oslo, Norway, and listed on the NASDAQ stock exchange (OPRA).

About Opera in Africa

Opera has a long history of investing in Africa, having been on the continent for over 15 years. The company has found success by being sensitive to the unique device, data, and connectivity requirements that characterize the sub-Saharan market in particular, where the price of mobile data is the most expensive in the world. In 2020, Opera adopted its Africa First strategy, in which the company pledged to invest hundreds of millions in the local economy while developing products and services with the African consumer in mind.

Opera also invested in local data centers to make data more accessible for locals. Moreover, when the whole world was forced online at the beginning of 2020, Opera decided to support Africans who faced high data costs by partnering with 11 of Africa’s largest telecom providers – including Airtel, Safaricom, and MTN – to enable Mini users up to 3GB of free data each month; so far, over 50 million users have benefited.