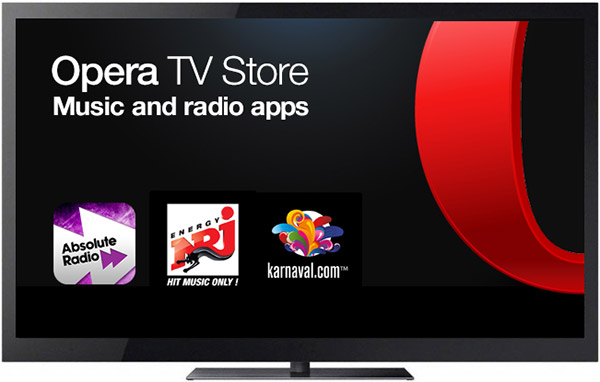 Absolute Radio, the largest independent radio station in the United Kingdom, and Karnaval, the biggest online radio station in Turkey, have now landed in the cloud-based app store for Smart TVs. All these radio apps and more have been developed by TV App Agency.

Absolute Radio will populate the Opera TV Store with its Player App, which incorporates the station’s network of brands. Users can enjoy the Absolute Radio experience along with a combined network audience of 3.3 million listeners.

Opera Software has also recently signed an agreement with Radio ENERGY (NRJ Group), the leading European radio network with stations in 14 countries, to bring their radio station app to the Opera TV Store.

“TV long ago overtook radio’s central location in the home, but now radio is carving out a space of its own on the box,” says Daniel Nordberg, Director of Business Development for TV & Devices at Opera Software. “Music apps are among the most popular apps in the Opera TV Store, and we are excited to bring new listening content to it, as well as providing more entertainment options for users.”

The Opera TV Store is an HTML5-based application framework built on Opera’s advanced browsing engine, giving users a rich selection of entertaining apps and providing one of the most advanced web development environments for developers.

The Opera TV Store is available on Sony Bravia TVs and Blu-ray Disc players, as well as devices from TCL, Humax and MediaTek. The Opera ecosystem is more than just the Opera TV Store, with Opera powering the web on tens of millions of devices, including Sony, Sharp, Loewe, Boxee, Hisense, Freesat+, Vestel and Altech.

For developers keen to build the next must-have app for TV, development is easy with the Opera TV Emulator. For content owners eager for TV apps, Opera’s TV templates for video and news content are free, simple to use and will help get your app into the Opera TV Store quickly. With development partners like TV App Agency, Opera Software can help you source the right development resources. Visit dev.opera.com/tv/ to find online tools, guides and forums, or contact Daniel Nordberg to learn more about Opera Software’s agency partnerships.

Come and meet Opera Software at booth #213 at TV Connect in London, March 19-21. For commercial meetings and media meetings, contact us.