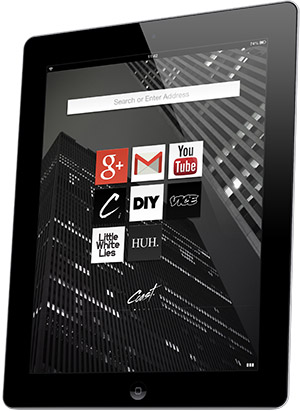 Launched Monday this week, Coast by Opera, the browser that every iPad needs, has been welcomed with open arms in all major iPad markets. Coast has been on the top of the lists in Germany, Norway, Poland and a whole bunch of other countries – as well as number five in the U.S. App Store list.

“It’s awesome to see that so many people want to try it, but it feels even better that the feedback we have received has been so amazing,” says Huib Kleinhout, Head of the Coast team at Opera Software. “You know, launching something like this – you try to act calm, but you are actually really nervous and just hope people will like it. The team and I are very grateful for the hundreds of five-star ratings the many Coast users have given so far.”

Coast by Opera is a web browser that’s the perfect match for your iPad. It dispenses with most old browser conventions, such as back and forward buttons, and replaces navigation with gestures – just as you expect from an iPad app. The brains behind Coast have put a lot of effort into the visual style, making the most out of iPad screen real estate, and have polished Coast’s look and feel to a fine shine. Now, the hard work has paid off.

Here’s what folks are saying about Coast by Opera:

“Coast is different from a lot of reinvented browsers in that it’s not different merely for the sake of being different; it’s a thoughtful retooling of browsing that feels even more iPad-like than Safari does.” – Time

“By far the most impressive feature is the fluid response of the browser. Pages load almost instantly and the process of moving between sites offers the perception of flipping through a magazine.” – Cnet.com

“The new browser is called Coast and it’s a dream.” – BoyGeniusReport

Top of the crop

To give Coast a spin, head over to the Apple App Store and check it out for free, or click here.

Check out the Coast by Opera video.