Kicking off in 2014, owners of select Samsung Blu-ray Disc players will be able to unlock a wealth of exciting apps specially built for TV screens. Opera Software today announced that apps from the Opera TV Store will be available on Samsung’s Blu-ray Disc players, providing viewers with more choices of online and streaming entertainment for their TV screens and giving app and content owners a huge new audience. 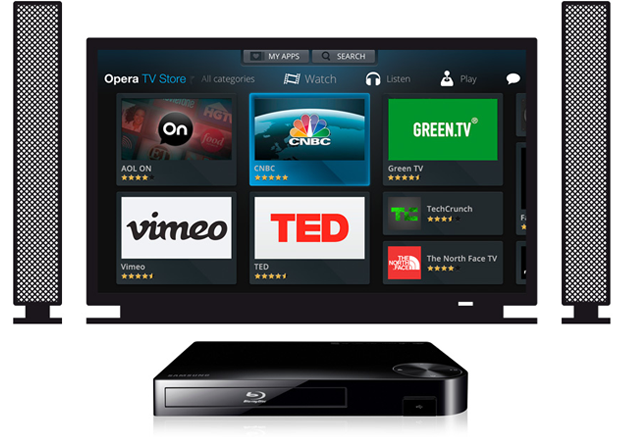 Samsung Blu-ray player users provide a great new reach for brands and online video content publishers through the Opera TV Store. Content owners can easily transform their video and audio offerings into HTML5 apps for the Opera TV Store with Opera TV Snap, launched in July 2013 with its first video-sharing site partner, Dailymotion. Official users can turn their Dailymotion channel into a Opera TV Store app simply by clicking on the “create a TV app” button. It takes less than a minute and the service is free of charge – making it one of the fastest and easiest ways to reach Blu-ray player users.

From video, music and games to social media, news, sports and science, the Opera TV Store delivers hundreds of HTML5-based apps optimized for connected devices. Users can watch their favorite online HD video content on the biggest screen in the home, enjoying a comfortable lean-back experience and getting the best out of the web on their TVs.

“The Opera TV Store unleashes the full potential of online video content, the most popular consumption category on Blu-ray players and various other media player devices,” says Aneesh Rajaram, SVP for TV & Devices, Opera Software. “With Samsung’s Blu-ray player on board, we significantly increase the reach we bring to our content partners and brands that are looking to engage with millions of consumers, while also providing those consumers with the best and widest choice in web content.”

The Opera TV Store is available on Samsung Blu-ray player Series 5 and Samsung Home Theater System Series 5, as well as some of Samsung’s Series 4 models.

The Opera ecosystem is more than just the Opera TV Store, with the Opera Devices SDK and Opera browser powering the web on tens of millions of devices, including Sony, Philips, TCL, Humax, Sharp, Hisense, Vestel, TiVo and Altech devices