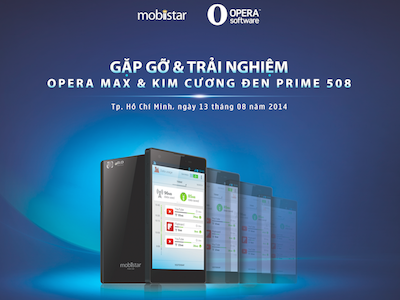 Opera Max is an app that provides data savings across most of the apps and browsers on a device. Opera has leveraged its market-leading video and data compression technology in Opera Max – which compresses video, photos and text – giving users up to 50% more data on capped mobile data plans. Videos start faster and have far less buffering while using Opera Max. Also, users can easily monitor and manage the mobile data consumption of each app from Opera Max’s intuitive dashboard.

Some 70% of videos on 2G and 3G networks in Vietnam have experienced stalling; therefore, most people in Vietnam may find it challenging to watch videos through mobile networks without stalling or buffering. That rate is the second highest among Southeast Asian countries (with Myanmar taking the number one spot, with 88%). These statistics come from Opera’s Skyfire unit, which combined its global data on mobile video network loads with extensive bandwidth test data from the wireless network authority OpenSignal, using data from late 2013 on global networks.

“A growing number of Vietnamese consumers are watching videos on their phones these days. We want them to enjoy a smooth video experience on Mobiistar phones when they’re on the move,” says Carl Ngo Nguyen Kha, CEO, Mobiistar. “With the innovative video and data compression technology in Opera Max, Mobiistar can more easily enable a better and affordable smartphone experience. We are very proud to be the first mover in Vietnam to make Opera Max available.”

“The reach of Opera Max is spreading further and further. Following an initial launch in Europe and the USA, we expanded in recent months to bring its awesome compression power to Brazil and Russia,” says Sergey Lossev, Head of Opera Max at Opera Software. “Now, because of Mobiistar, Opera Max will land in Vietnam before it is even available in the local Google Play store. With Opera Max preinstalled on Mobiistar handsets, users can now easily manage the mobile data usage of their apps and enjoy far less video buffering while on the go.”

Opera Max is now available exclusively on Mobiistar’s selected models, including the Lai504m and Bean414. The recently launched Prime508, Mobiistar’s flagship model, will also be equipped with Opera Max.

Mobiistar is the mobile phone brand of Mobile Star Corporation, launched in Vietnam in June 2009.

Over the last five years, Mobiistar phones have been distributed in most of the cities and provinces of Vietnam, through large retail systems such as Mobile World, Vien Thong A, Viettel, as well as the large wholesale dealers of Vietnam’s provinces. Mobiistar has become one of the popular local mobile phone brands.

With the mission to make its users “Enjoy More”, Mobiistar has product lines ranging from basic phones to smartphones with advanced configuration but reasonable prices.

In 2012, Mobiistar pioneered the movement to popularize smartphones, making the category widely available to all walks of life in Vietnam. More information about mobiistar is at www.mobiistar.vn/.