Opera Mediaworks launches the Native Video Fund. Over 15 global brands as well as creative and media agencies partner for launch in Q1 2015 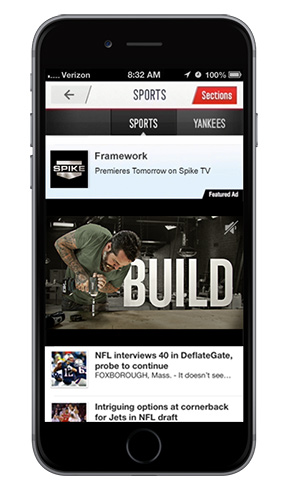 Opera Mediaworks today announced the launch of the Native Video Fund, a program devoted to answering the digital advertising industry’s need for a mobile-first approach to video creative. The Fund, supported by an alliance of top global brands and agencies, provides financial backing for the production and placement of mobile video campaigns in premium, in-app native video environments powered by Opera’s AdColony Instant-PlayTM HD video technology.

“Despite tremendous growth in mobile video advertising, there still is a huge opportunity for creative resonance – especially in social and native environments with video. The Fund frees our ad partners to develop mobile-first creative, push the boundaries of what mobile video previously has been and show the world what it should be with very little risk,” says Will Kassoy, CMO, Opera Mediaworks.

Participants include but are not limited to:

“Despite the shift in consumer behavior, most brands are not yet producing video creative with the mobile platform in mind,” says Adam Shlachter, Chief Investment Officer at Digitas. “Planning for mobile opportunities needs to occur earlier in the process with brands and agencies. Editing broadcast video spots to run on mobile doesn’t realize the potential of native video; Opera Mediaworks’ Fund enables us to reshape this process, not just for creation of video assets for mobile, but to help drive the necessary education and shift in mindset to properly approach this space.”

These campaigns, which will debut in Q1 2015, must be less than 15 seconds in length and creatively designed for impact in a native, in-feed video environment. Opera Mediaworks will provide participating brands the option of receiving up to $50,000 for the creation of native video ads plus $50,000 in media, or $100,000 in total media.

“Instead of just sitting around and waiting for change, we set out to solve the problem of video ads that don’t work for consumers on mobile,” says Mike Owen, EVP North American Sales, Opera Mediaworks. “We’re thrilled to be joined by such an elite group of brands and agencies that are committed to shifting the way mobile creative is developed for native video advertising.”

All Fund participants will work hand-in-hand with the Opera Mediaworks Creative Team to innovate campaigns according to established best practices for mobile video. Upon launch, the campaigns will be tracked, measured and evaluated for impact and effectiveness, and each campaign will be part of an industry-first research study for native video on mobile.

In addition to funding the production and placement of mobile-first native video creative assets for brands, the Native Video Fund works to elevate premium publishers across categories like entertainment, news, music and social including but not limited to Maker Studios, PEOPLE/Time, Inc., Pinger, Shazam, USA TODAY and more who are taking advantage of AdColony’s feed-based, native video advertising in their mobile apps. The intent is to provide best-in-class, engaging and entertaining video for their users to foster a better app experience.

“While native video is among the fastest growing video formats in mobile, it’s also the hardest to engage users in as they scroll past ads quickly within the content feed,” says Nikao Yang, SVP Global Marketing at Opera Mediaworks. “But if brands can develop truly engaging video creative that is less than 15 seconds in length for native, in-feed environments, then they’ve nailed creative that will engage users across all mobile video environments. The Fund will drive the entire app ecosystem towards that goal.”

The Fund is one of the first major video-focused initiatives stemming from Opera’s acquisition of AdColony in July 2014. AdColony’s proprietary Instant-Play™ HD video technology is fully integrated into Opera Mediaworks’ core mobile advertising platform, and together the combined companies are actively implementing AdColony-powered video products across their shared portfolio of advertiser and publisher offerings.

Opera Mediaworks is the first mobile ad platform built for brands, delivering breakthrough marketing at scale. Our technology powers the biggest publishers in the world, enabling marketers to convey the highest quality ad experiences to more people in more places when it matters most. Our exclusive Instant-PlayTM HD video technology and award-winning rich media touches, engages and creates deep interaction with consumers in the most popular mobile apps and sites around the globe. We work with over 90% of the AdAge Top 100 advertisers and 18 of the top 25 global publishers. A fully-owned subsidiary of Opera Software, Opera Mediaworks is headquartered in San Mateo, California, with offices worldwide. To learn more, visit www.operamediaworks.com.