According to testing performed by Cigniti Technologies, an independent software testing services company, Opera Mini consumes on an average 14% less battery and 89% less data when compared to other mobile browsers. This announcement is part of a performance benchmarking and independent testing report for data and battery consumed by different browsers. The tests evaluated the performance of Opera Mini against other leading mobile browsers such as Chrome, UC browser, CM browser and UC Mini on Wi-Fi, 2G and 3G networks in India.* 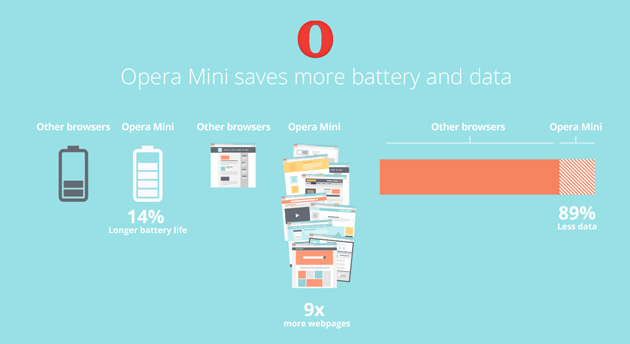 Opera Mini outperformed all other browsers Cigniti tested and used the least amount of data when loading websites across categories such as social networking, e-commerce, video sharing, classifieds and news publications. Opera Mini on an average consumed 89% less data than other mobile browsers. This means users of Opera Mini can view up to nine times more web content using the same amount of data as the other browsers tested.

Save money and stop worrying about data bills

For many mobile users, exceeding their limited data plan could be a reason to browse cautiously and a point of stress while surfing the web. This may not apply to Opera Mini users, though. Example, if a user is on a pay-as-you-use data plan – for every 1 GB of data used, browsing using other browsers on an average will cost  between Rs. 1,465 to 1,369, while Opera Mini costs only Rs. 130. It means that users can save upto Rs 1,330 every month while browsing with Opera Mini.**

Save battery and surf longer from mobile phones

Cigniti conducted these tests across a range of devices with different battery capacities. Overall, they observed that Opera Mini uses the least battery. Opera Mini on an average consumes 14% less battery than other mobile browsers.

**Rates are taken at 2 paisa per 10 KB. Data costs calculated as per average data used by Opera Mini and all the other web browsers.