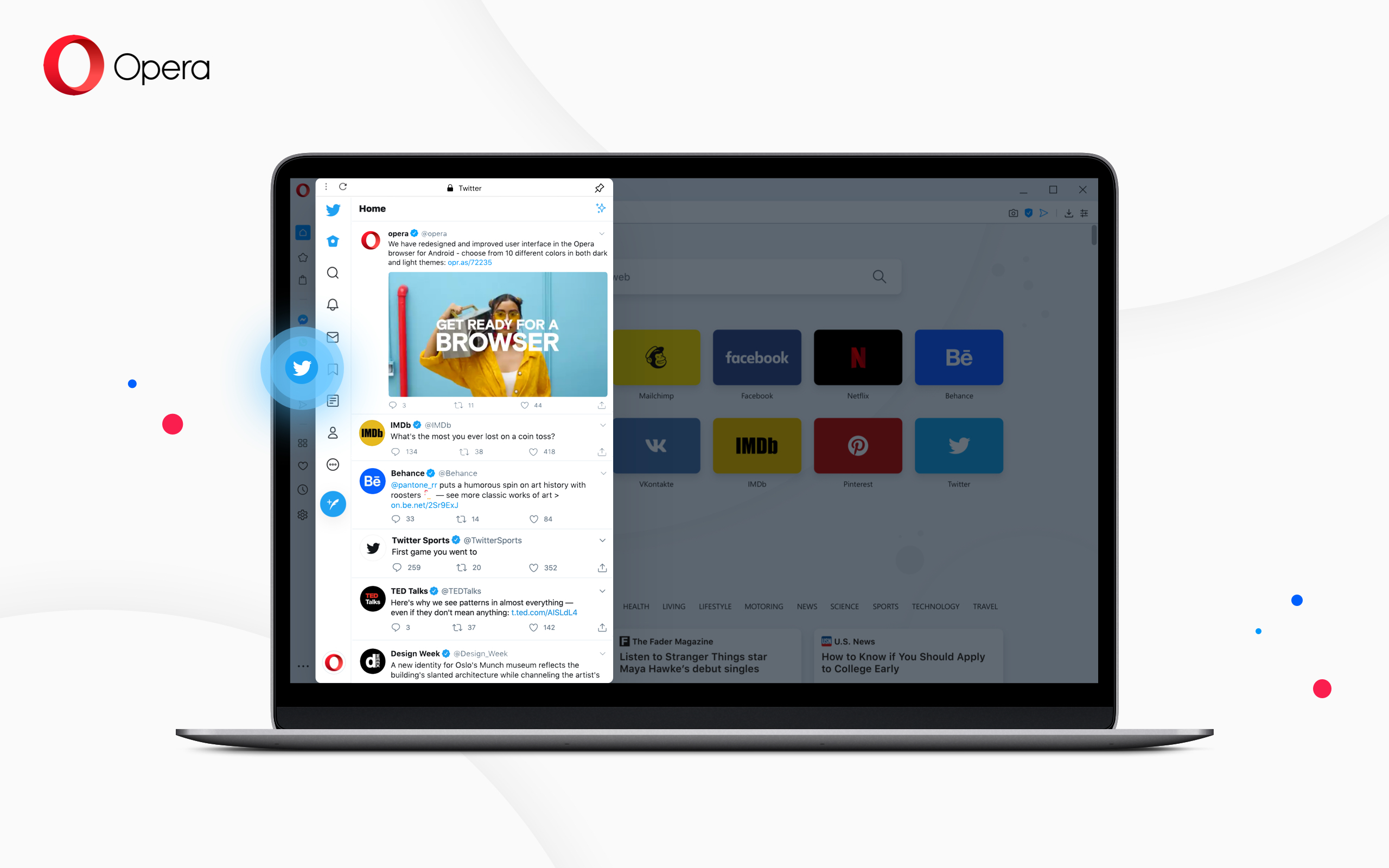 Today the Norwegian browser maker Opera [NASDAQ: OPRA] becomes the first major browser to add built-in Twitter in the sidebar. In version 69 of the Opera browser for desktop, Twitter fans can get the best possible experience on their desktop computers.

According to a survey conducted by Opera, 62% of Twitter users in the US wish for the social media platform to be easier to use on their desktop computers.

“Having Twitter in the sidebar is perfect for people who use it very actively,” said Maciej Kocemba, product director at Opera. “Twitter users think it should be easier to access Twitter on their PCs and we agree: we have tweaked Opera to make it the perfect browser for them.”

Thirty-nine percent of the Twitter users who participated in Opera’s survey check the platform several times a day. Using Twitter directly in Opera makes it more convenient for them to scroll through their feed or search Twitter.

The use of a keyboard and a large display makes tweeting or sending direct messages more convenient. Using Twitter directly in the browser’s sidebar is also more convenient than picking up a smartphone or opening a special client app on one’s PC, especially when it’s breaking news one wants to follow. The sidebar integration makes it easier to find Twitter whenever it’s needed.

“Whether it’s a Throwback Thursday or a #Caturday, no one likes to waste time looking for the tab where they last opened Twitter” added Kocemba.

Having Twitter built into Opera gives users quick access to their main feed, the search function as well as direct messages, allowing people to respond to unfolding events more quickly.

According to the survey conducted by Opera, almost three quarters of American internet users would find it useful to have social media messengers built into their desktop browser.

With today’s Twitter integration, Opera is proving that it’s the best browser for social media. Opera has already introduced built-in support for Instagram, Telegram, Facebook Messenger, Whatsapp and VKontakte as part of previous releases. After choosing the social media platforms one uses, they remain always at hand directly in the sidebar.

“We’ve been following the philosophy of making Opera the best browser for social media for a while now and have integrated all the top services,” said Maciej Kocemba. “We see this resonating with people and have noticed strong growth in both user numbers of Opera as well as the use of our browser’s built-in features.”

For this release, Opera decided to study Twitter users’ interests by conducting a survey on 1000 American internet users via Pollfish. The respondents in Opera’s survey were mostly interested in using the platform to find out about breaking news (44%), to keep up with news in general (49%), to pass time (44%) and to see what people are talking about while watching TV, sports or live events (26%).

The newest version of Opera also includes a new weather widget on the start page as well as improvements to Workspaces and the visual tab cycler.

Opera is available for Windows, Mac and Linux. Download it from https://opera.com

Opera is a global web innovator. Opera’s browsers, news products and fintech solutions are the trusted choice of more than 360 million people worldwide. Opera is headquartered in Oslo, Norway and listed on the NASDAQ stock exchange (OPRA). In recent months Opera noted an increased engagement with its browsers, reaching a record number of 73 million monthly active users of its desktop browsers in March 2020.