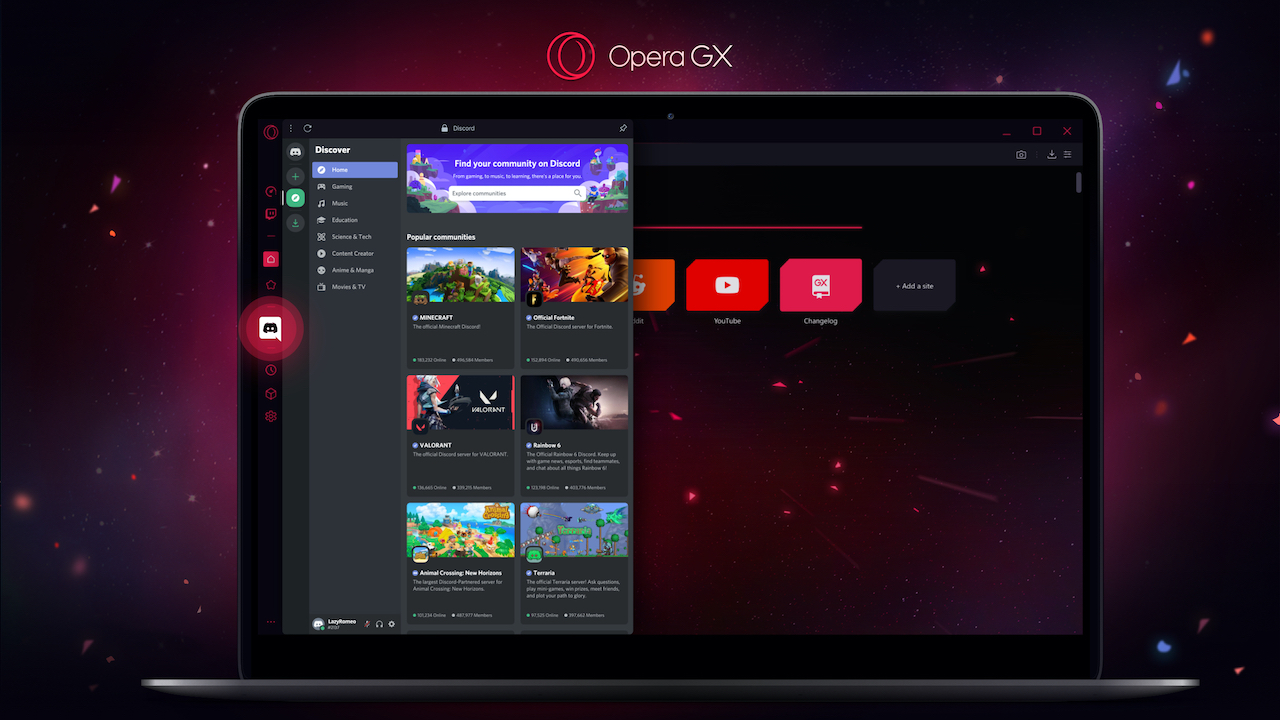 Oslo, June 19, 2020 – With 1.3 billion PC gamers around the world and the gaming industry surpassing the movie and music business in revenue, Opera GX [NASDAQ: OPRA] remains the only PC browser designed with gamers’ needs and tastes in mind. The browser has an array of useful features including Twitch integration, as well as CPU, RAM and network bandwidth limiters. Today, Opera GX is getting a major birthday update which introduces built-in Discord support, as well as the Hot Tabs Killer feature, which lets gamers see which tabs are overwhelming their computer and easily close them.

Why every gamer should give Opera GX a try

Opera GX was launched in June 2019 during the E3 gaming expo in Los Angeles. One year later, the gaming industry has grown even more relevant. As events were canceled and restaurants, cinemas and other sources of entertainment closed, an increasing number of people turned to gaming to participate in virtual mass events such as Travis Scott’s concerts in Fortnite – watched in real time by 27 million people. Meanwhile others hosted birthday parties and even weddings in Animal Crossing: New Horizons. Still others turned to Discord for remote teaching. Games and virtual reality are now more than ever an extension of our everyday lives as they provide the necessary meeting spaces that might otherwise be unavailable.

With native integration of Twitch, WhatsApp, Facebook Messenger, Instagram and now Discord in the sidebar, Opera GX makes it easy to stay on top of conversations with online friends as well as with developing online trends and streams.

“Our users have been asking for native Discord support in the browser so here it is. Everyone can now more easily connect with their community on any topic they want,” said Maciej Kocemba, the creator of Opera GX and product director at Opera.

As the majority of our lives moved online, Discord developed from being the go-to place for gaming-related topics to covering any topic and even became a platform that allowed schools to host online classes.

With this step, Opera GX is not only integrating the feature but also entering the Discord community to discuss the browser as well as gaming with its fans. For the Opera GX Discord server, click here.

For the tab hoarders among us, Opera GX has a new useful feature called Hot Tabs Killer which lets you identify the most resource-draining tabs and slash them with a sword to make sure the browser doesn’t overburden your PC or laptop.

Opera GX was designed to be dark and not blind you while browsing. With its new Force Dark Pages feature, it brings that experience to any web page, even if the page was designed as glaring bright. The feature injects its own changes to a site’s styles to turn bright backgrounds dark, making sure that users aren’t blinded by web pages. This feature is currently in beta and has to be explicitly switched on.

The only browser to limit the amount of CPU, RAM and network bandwidth it uses

Opera GX comes with a set of features which have been tweaked to the specific needs of people who love computer games. The browser is the only one to take care of the way the browser affects the functioning of the entire machine: Opera GX allows users to make it less resource-hungry by setting a limit to the amount of CPU and RAM used by the browser, as well as to the network bandwidth.

Opera GX users can adjust elements such as the hovering style of icons or the browser sounds, designed with the award-winning composer Rubén Rincón and the band Berlinist. The sounds can be individually enabled/disabled and while they do sound great on speakers, Opera GX has recently joined the Better with Headphones club.

Apart from its unique features, Opera GX also has all the features known from the main Opera browser. These include a free built-in browser VPN, ad blocker, as well as Workspaces – a tool for better tab grouping according to topic.

Opera GX includes the GX Corner, a portal within the browser which is a one-stop source for gaming news. The GX Corner includes a game-release calendar as well as a deals and free gamers aggregator which lets GX users know first about GTA V being offered for free and other deals. The free games section is particularly popular among GX users.

“Whether you’re a hardcore gamer or a casual one, Opera GX is a great entryway to everything gaming-related. It will display your favorite gaming news and deals. It also looks and sounds great and will make your browser use as few resources as possible allowing for your games to run smoothly,” added Maciej Kocemba.

The creators of Opera GX, notably from the Norwegian browser firm Opera, have been competing in the browser space with the likes of Microsoft, Google and Firefox and have already won two design awards for GX: the iF Design Award and the Red Dot award.

Birthday stream coming up on June 19

To celebrate its birthday with the community of 3.5 million people who actively use Opera GX each month, the browser will be moving up to Level 2 and hosting a birthday party stream on Twitch on Sypher PK’s channel at 17:00 CEST (11 AM ET) on June 19. The stream will be accompanied by a discussion on Opera’s discord server.

In early July, the browser will reveal the results of its first worldwide gamer survey, in which 200 thousand people have revealed secrets about their gaming habits, the games they like and even the drinks they hydrate with while gaming.