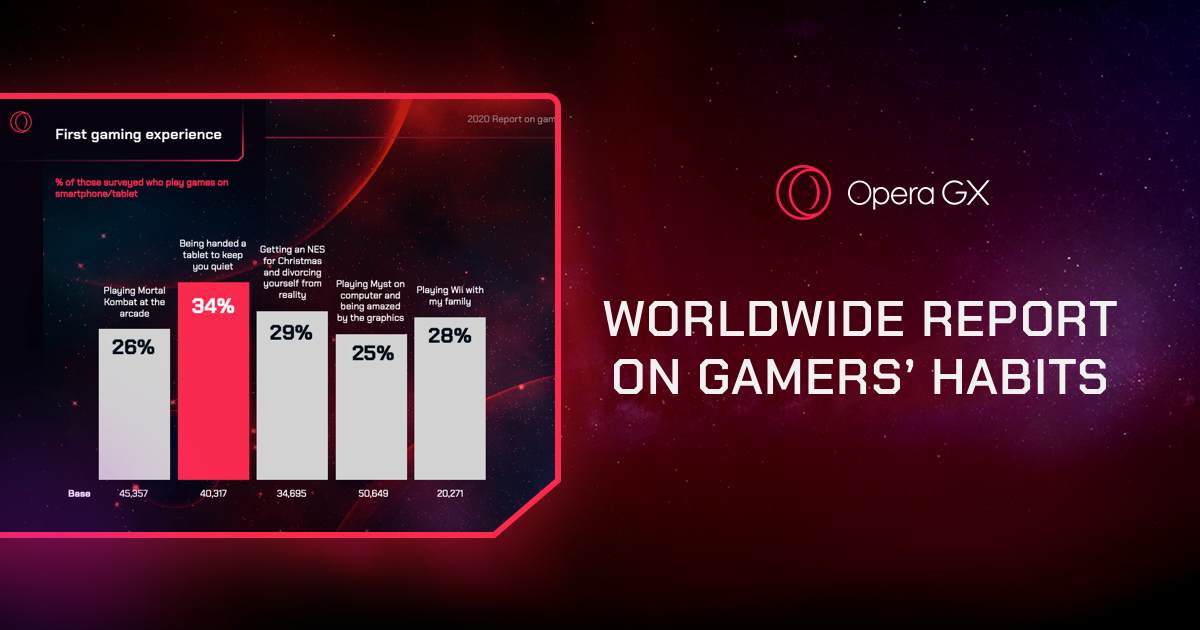 More than 191,000 people revealed their favorite gaming genres, streaming habits, and even the types of drinks they choose while playing games and watching streamers. Today, the world’s first browser for gamers is also launching a quiz that lets you find out what type of gamer you are.

Oslo – A little more than a year after it’s launch during E3 in Los Angeles, Opera GX, the world’s first and only browser for gamers, decided to ask its users from the US, UK, Germany, Brazil, Russia and Poland about their gaming and streaming habits in the largest gamer survey to date. More than 191 thousand people responded, providing these interesting insights, among others.

Gamers love to play games on both their PCs and mobile devices, and this experience starts early: 34% of people who currently play games on smartphones or tablets were handed a tablet to keep them quiet in their childhood. But this experience varies according to region: the largest chunk of gamers from the UK and US had their first gaming experience playing Wii with their families.

No one wants to admit how much time they really spend in front of their screens. From our experience, this applies equally to how much time they spend gaming. So we asked Opera GX users twice. As expected, the numbers went up the second time we asked: one third of surveyed gamers gave higher estimates: 31% admitted playing 3-4 hours a day, 30% 5-6 hours a day and 39% admitted gaming between 7 hours a day and never stopping.

Why play only one game when you can play four?

While globally most people play 3 or less games at a time, Poles, Brits and Americans proved to be the most likely to play 4 or more games, with 35%, 37% and 39% respectively playing the highest number of games.

Violence is a common aspect of many games, so the Opera survey asked gamers about their attitudes towards it. Results showed that US and UK gamers seemed the least sensitive to it while Brazilians had the highest share of pacifists and people who dislike violence among them.

In general, the more time people spent playing games, the less sensitive they were towards violence. Gamers spending more than 8 hours each day playing games proved to be at the very peak of violence-insensitivity. Interestingly, gamers from the 18-34 age group turned out to be the most insensitive to violence.

While most women and men didn’t have a preferred time of day for gaming, female gamers proved slightly more prone to playing games during the night.

Meanwhile, male gamers are big fans of shooters: 65% said they play FPS, followed by action and adventure games (52% each) and RPG gamers (45%).

Do they ever stop playing games? Yes they do! Most gamers (51%) admit to pausing their games when it’s three in the morning and they have to get up at six. Among other segments: female gamers more often stop when they can’t feel their fingers anymore and male gamers will more often briefly pause for firmware updates.

To stream or not to stream – that is the question

More than half of gamers who participated in Opera GX’s survey (53%) do not stream but like to watch streamers, while one third are streamers themselves. Among all markets, the USA and Russia had the highest percentage of streamers.

Gamers wouldn’t be gamers without proper gaming setups so we asked them about those as well. As it turns out, German and US gamers tend to spend more money on gaming gear than gamers in other markets. 51% of people globally tend to use only one display for gaming with the exception of Germans, of whom 54% use two displays or more. Despite splurging on displays, Germans turned out to be the most price-conscious from all the surveyed nations when it came to buying new games.

The Opera GX team was also curious abou gamers’ favorite drinks. As it turns out, people who spend less time playing games tend to more often pair the experience beer or wine, while those who spend more than 5 hours a day gaming resort to energy drinks or soda. Cheers!

Based on the survey results, the Opera GX research team established 5 gamer profiles: Ultimate gamers, Average Gamers, Fancy Gamers, Chilled Gamers and Youngster Gamers. To find out which group of gamers you belong to, you can take a special quiz. The same link will also lead you to the full report.