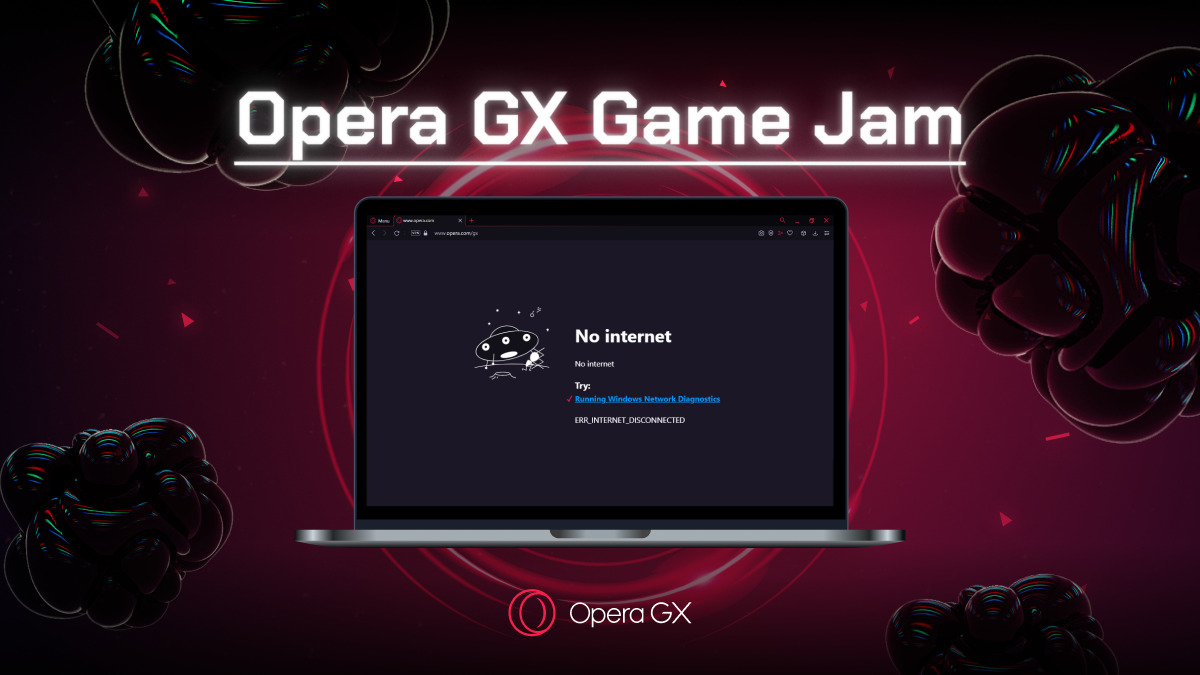 22 July, 2021, Dundee, Scotland and Oslo, Norway –  We all know the horror of bad online connections. Ever lost the game due to lag? Got kicked out from a server when your WiFi went crazy? The Internet is great when it works. But what if it doesn’t?

‘When the internet is out, some browsers get on our nerves with dinosaurs or surfing games which only reminds gamers that without the internet we’re back to the stone age and can’t surf the web. We created the Opera GX Game Jam to call on all artists and creative gamers to make the offline experience fun,’ said Maciej Kocemba, Product Director of Opera GX.

The Opera GX Game Jam competition will give one winner the unique opportunity for their game to be played by millions in the Opera GX offline page. The top three artists will also win cash prizes of $3k, $7k and $10K. The winning game will gain the prestige of becoming the first playable game to ever feature in Opera GX, helping to entertain gamers during those rare offline moments that would otherwise make them cry.

The GX Game Jam is being hosted with GameMaker Studio 2 – the world’s leading 2D game development engine, and in collaboration with Game Jolt, one of the largest communities for games and the people who make and play them.

The best game will receive expert development support from the GameMaker team, before being unleashed within the Opera GX desktop browser. Once completed, it will also be promoted to Opera GX’s millions of users through the browser’s GX Corner and across the social accounts of Opera GX, GameMaker Studio 2 and Game Jolt.

The Opera GX Game Jam will be open for submissihttps://opr.as/OGX-GJons starting on the 29th of July, when the theme for the event will be revealed.

Artists and game creators can register their interest, receive a free GameMaker Studio 2 licence for the duration of the jam, and read the terms and conditions by visiting this LINK.

“GameMaker Studio 2 is the perfect engine for Game Jams, as it allows anyone to convert creative ideas into playable games quickly. Whether using the intuitive no-code/low-code Drag and Drop system or it’s powerful GameMaker Language (GML), anyone can use GameMaker to take part in the Opera GX Game Jam 2021,” commented Russell Kay, CTO for GameMaker Studio 2. “It’s imagination that counts most, so get involved!”

In 2019 Opera launched Opera GX, a browser built for gamers with features that include countless customization options, sound effects, background music, a gaming-inspired design, as well as CPU, RAM and Network Bandwidth limiters that make the browser less resource-hungry and leave more of the computer’s resources for gaming. Opera GX has seen tremendous growth over the past year with a user base of more than 9 million highly engaged monthly active gamers. Opera GX’s user base grew 350% between 2019 and December 2020 and it continues to grow at a fast pace. Opera GX continues to receive high ratings (4.7 out of 5.0). It also recently launched Discord server which quickly became number one in the Science & Tech community with more than 350K members. In June 2021, Opera GX became available on mobile devices as the world’s first mobile browser designed for gamers.

Game Jolt is both a social community and a game distribution platform hosting over 200K+ games with massive fan run communities for top AAA games like Minecraft and Pokemon. There are hundreds of thousands of creators on Game Jolt from all corners of the world – ranging from influencers with millions of followers to studios with millions of dollars in revenue.

For press information, reach out to press-team@opera.com