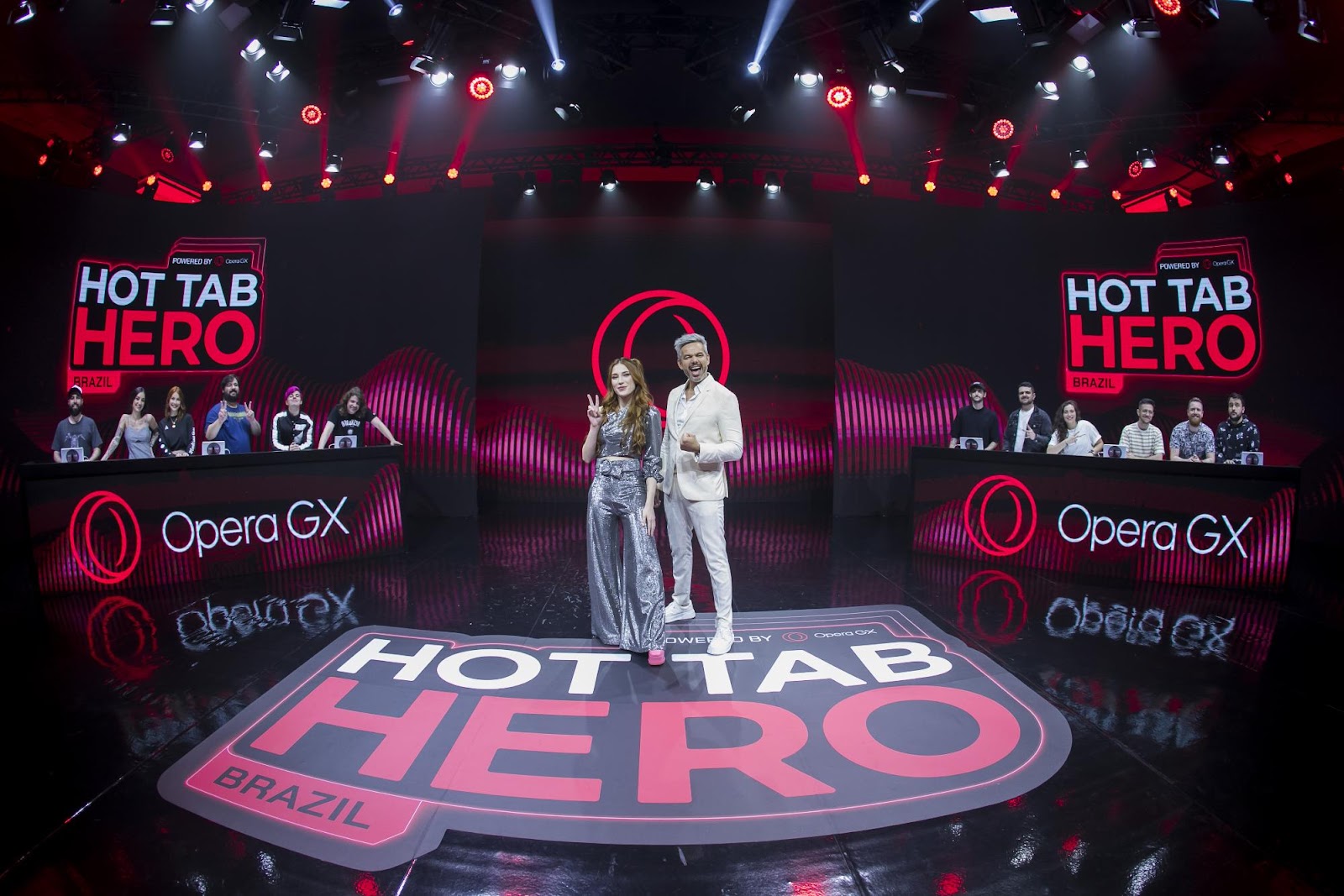 São Paulo, 11 January 2023 – Opera GX, the world’s first gamer browser, has just announced the launch of the game show Hot Tab Hero, which was recorded in Brazil for the first time with big names from the gamer scene such as LubaTV, Jean Luca, Calango and Gusang. Hosted by Otaviano Costa and the streamer Gab Zuski. Hot Tab Hero was recorded in two episodes, the first of which is available on Opera GX’s YouTube channel starting today.

Hot Tab Hero – which was created by Opera GX in partnership with the global production company Dentsu Creative – brings together game creators and teams of their choice to fight for money that will be shipped to the winners’ viewers. The different teams can win big money through a special trivia quiz, the objective of which is to see who knows more about the universe of games. The quiz features a series of questions about esports, game culture, and, of course, YouTube and Twitch creators and their fandoms.

According to Opera GX’s product director, Maciej Kocemba, Brazil was chosen as the first place in Latin America to receive Hot Tab Hero because Brazilians are part of a very engaged community of users and fans. “With how well GX is received in the country, it was only a matter of time before we launched our own version of Hot Tab Hero there. With a prominent gaming scene in Brazil, fans are more than ready to find out who the country’s Twitch kings and queens are,” he said.

For Otaviano Costa, hosting Hot Tab Hero was an incredible opportunity, as the actor has been fascinated by the community and has been a gamer for many years. “Being able to be alongside such sensational and talented figures from this universe is pure fun and a great ‘software update.’ I hope people like what we prepared with great care and quality. Game on!” he said.

The goal in Hot Tab Hero is to answer as many questions correctly as possible, with each correct answer scoring R$ 500, and thereby secure a place in the finals to compete for prizes of up to R$ 40,000. Ultimately only one team can be crowned champion and take home the prize money that they will then distribute to their followers through raffles, vouchers, and via discounts on games or other initiatives that they will later define.

How does the show work and what is its reward?

Played in three rounds of multiple-choice questions, Hot Tab Hero features the streamer and vlogger LubaTV as captain of one of the teams in the first episode, alongside the gamers Rolandinho and Bruno Rataque. They are pitted against a team led by the gamer, actor, and digital influencer Jean Luca, who is joined by the gamer and content creator Caputile and the streamer Mands. The episode, which was shot with a live audience, is already available on the Opera GX browser.

“Bringing Hot Tab Hero to Brazil was a hit. Video games are infinitely more fun when you play and participate in a community, and being a part of the program, both as a spectator and as a leader of one of the teams, was amazing. Opera GX is already present in my daily life as the best browser for the gamer community, so it was very gratifying to be present on the game show!” said LubaTV.

“I thought something like that made specially for Brazil was really amazing! I’ve always followed many initiatives of this type outside the country, but Opera did a great job doing something 100% original and for the people here who, for sure, will have a lot of fun with the episodes. It was super fun and I already hope to be invited to the next ones,” said Jean Luca.

In the second episode, which will be released soon, the streamer Calango, together with the gamer Multi and the vlogger and gamer Renan face the team of the YouTuber and gamer Gusang with the PS2 streamer Venão and the “the old influencer” Core.

Since its creation in 2019, Opera GX has quickly become the browser of choice for millions of gamers looking for a more personalized Internet experience. Along with tons of customization options including color themes, sound effects, background music and a design inspired by the world of gaming, the GX even includes CPU, RAM and network bandwidth limiters that make the browser less dependent on resources to run online games well. The browser also includes a feature called ‘Hot Tabs Killer’, which allows users to “wipe out” the most resource-wasting tabs, and GX Cleaner, to eliminate those unwanted old files. rs.

Dentsu Creative is a Global Creative Network that transforms brands and businesses through the power of Modern Creativity. Led by Global Chief Creative Officer Fred Levron, 9,000 experts across the globe work seamlessly together to deliver ideas that Create Culture, Shape Society and Invent the Future. Dentsu Creative was launched in June 2022 to address a client need for simplicity.