From the free NHK WORLD TV app on their connected TVs, audiences can reach news, documentaries, music, cooking programs, fashion trends, technology insights and much more from Japan, Asia and the rest of the globe.

“The world truly is flattening when premium regional broadcasters like NHK give viewers anywhere in the world more choice of exciting on-demand content,” said Aneesh Rajaram, Senior Vice-President for TV & Devices at Opera Software. “NHK is extremely savvy with seeing the potential of early technology trends, and viewers will agree that its app adds even more engaging and entertaining content to the Opera TV Store.”

The Opera TV Store is an HTML5-based app platform that gives users a rich selection of entertaining apps. It has already launched globally on Smart TVs and Blu-ray Disc players from Sony and TCL, and has also been selected by Humax, Hisense and MediaTek.

The Opera ecosystem spans more than just the Opera TV Store, with the Opera browser and Opera Devices SDK powering the web experience on tens of millions of devices, including those made by Sony, Samsung, Philips, TCL, Sharp, Loewe, Boxee, Freesat+, Vestel and Altech. 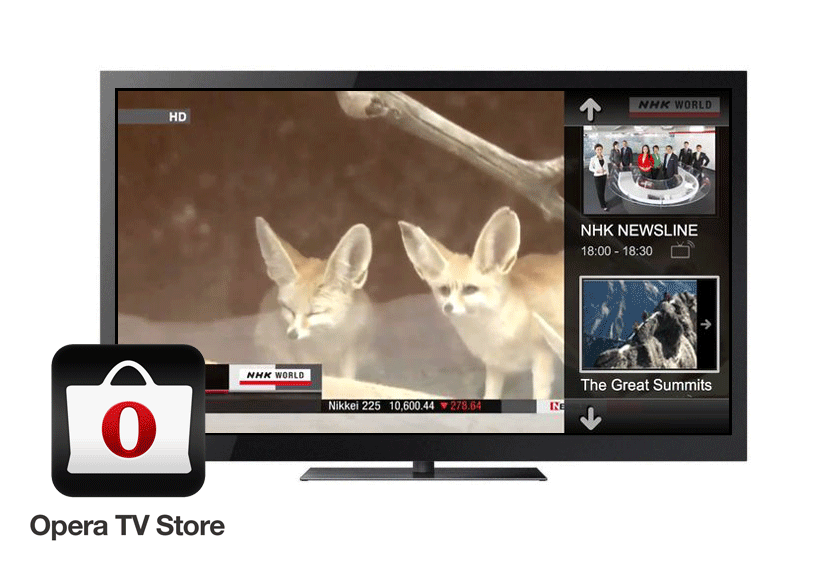 WORLD TV NHK WORLD TV is a news/lifestyle channel produced fully in English and broadcasted from Japan. Offering the latest news, as well as programs featuring traditional culture and contemporary trends from Japan, the channel serves as your gateway to Japan, Asia and the entire globe. NHK WORLD TV is currently available 24 hours a day to about 160 million households in some 130 countries and regions. In North America, it is broadcast 24 hours a day through terrestrial and cable/IPTV services mainly in New York, Washington D.C. and Philadelphia.