Cloud-based mobile video-optimization leader, Skyfire, a fully-owned subsidiary of Opera Software, has found through extensive testing that more than half (56%) of video consumers on India’s 3G networks suffer from significant stalling and re-buffering, leading to frustrated users and high video abandonment rates. Overall, 83% of users on 3G experience at least some stalling while trying to watch video. 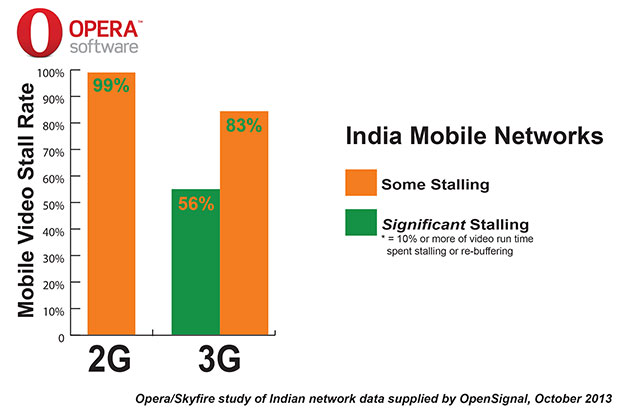 Skyfire’s data shows that on India’s 3G networks, 40% of all video streams ran at bitrates of less than 300 kbps, a very low speed for video playback on mobile devices. On mobile devices, HD video requires five to ten times higher bandwidth, and the immensely popular auto-play videos within the Vine and Instagram apps use a much higher bitrate (900-1300 kbps); therefore they will typically not play without frustratingly long start times. “Significant stalling” is defined as a video that stalls or buffers more than 10% of its overall playback time, and more than half (56%) of videos on India’s 3G networks experienced playback issues at this rate.

India’s 2G networks fared even worse for mobile video. On 2G, over 99% of users experienced at least some stalling.

This new data is noteworthy, because India is in a unique position with regard to video consumption on mobile devices. According to Cisco’s 2013 Visual Networking Index, mobile data traffic in India is projected to reach a whopping 900 petabytes per month by 2017, with 60% of that data coming from mobile video alone. Additionally, YouTube, by far India’s most popular video site, announced earlier this year that 30% of all YouTube videos consumed in India were already being watched on mobile.

“With video consumption clearly skyrocketing and causing such experience-impacting congestion in India, the country’s operators should implement cost-effective and quick-to-market solutions to enhance the end-user mobile video streaming experience,” says Sunil Kamath, Vice President for South Asia, Opera Software. “Indian operators have the opportunity to couple their regional LTE rollouts with mobile video optimization to expand capacity across 2G, 3G and 4G networks nationwide. Thanks to surgical, cloud-based, NFV-ready solutions now available, like Skyfire’s Rocket Optimizer, India can get this rolled out now, ensuring that users get relief from constant stalling and re-buffering.”

Skyfire’s Rocket Optimizer mobile video optimization solution, with its unique focus on real-time, cloud-based quality of experience detection and mitigation for each video stream, is designed to ensure that networks are flexible and elastic enough to withstand the video streaming demands that are both here now and will be dramatically increasing in coming years.

Come see Opera’s Sunil Kamath speak at Mobile.NXT in New Delhi on “What will make the mobile internet explode?” on November 14, 2013.

Skyfire is dedicated to leveraging the power of cloud computing to radically improve the mobile Internet experience for both operators and their consumers.
Skyfire’s innovative, next-generation carrier cloud approach to mobile video and data optimization provides wireless operators with huge cost savings, elastic capacity, and the ability to surgically enhance quality of experience on a per-stream level. Skyfire also introduced the first mobile browser extension platform to enable robust contextual & social browsing, as well as enhanced monetization opportunities for operators.

The company currently counts 4 of the largest mobile operators in the world as customers for its Rocket Optimizer™ and Skyfire Horizon™ solutions.

Skyfire, an Opera Software company, was founded in 2007 and is located in Mountain View, California in the heart of Silicon Valley.

OpenSignal is the global authority on the real world performance and coverage of mobile operators.

Whilst other methods attempt to approximate or model network performance, OpenSignal directly measures it. OpenSignal’s data is sourced from over 5 million users of its mobile app, providing a direct window into the true experience on mobile networks.