A recent study by research firm Strategy Analytics into consumers’ mobile music habits in the United States, China, France, Germany, Spain and the United Kingdom* found that 77 percent of mobile users listen to music on their phones – with 70 percent claiming to do so at least once per week or more. Seventy-two per cent also said that they use their mobile phones to listen to music at least once a week when the service is bundled into their operator data plan. 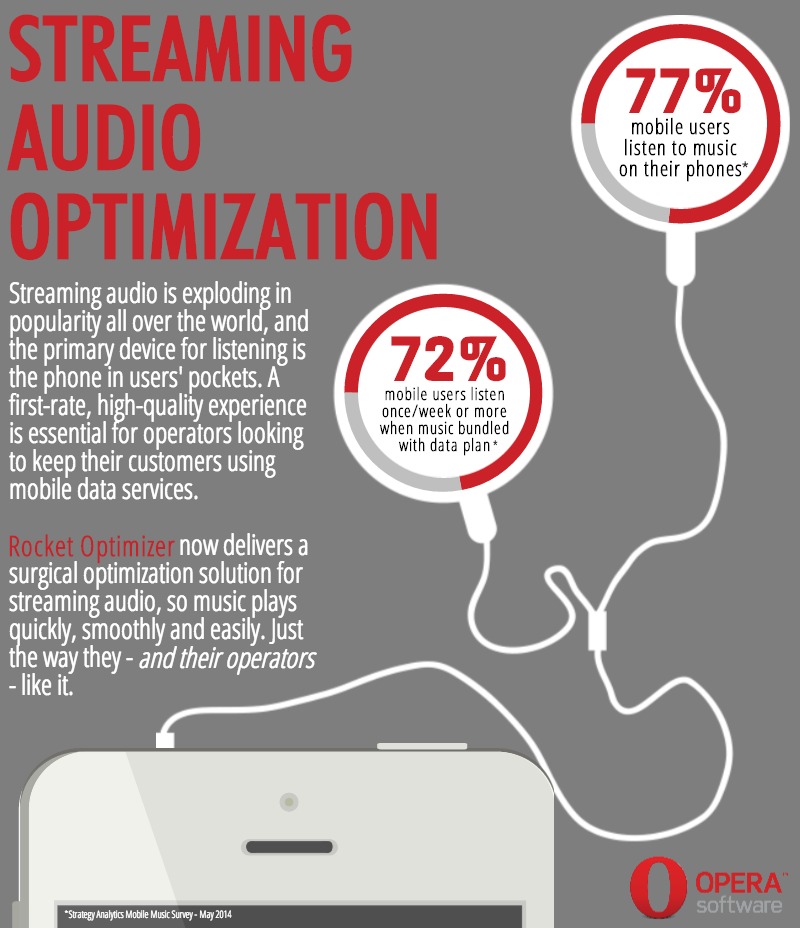 Rocket Optimizer manages streaming audio traffic in the same way that it optimizes mobile video traffic. It uses its built-in Experience Assurance functionality to automatically detect when the end-user’s live audio stream is about to stall, buffer or drop off entirely due to a poor connection – in real-time, before the problem starts. Rocket Optimizer then instantly adapts the audio stream to fit the available capacity in the network, in order to ensure the end user receives a smooth, uninterrupted, high-quality streaming audio experience.

Rocket Optimizer’s streaming audio optimization works with most of the world’s most popular streaming music services, as well as with “long tail” streaming content hosted on myriad web sites. It supports both MP3 and MP4 stream formats, and – unlike competing optimization solutions – can also convert streams to the more efficient AAC+ codec, which is able to deliver high audio quality over a low bitrate connection to any compatible device.

“With devices getting smarter and networks getting faster, streamed music – like video – is rapidly growing in popularity among consumers, and operators need to prepare their networks to deliver the superior quality of experience that consumers expect,” says Nitin Bhandari, Skyfire CEO and Opera SVP of Operator Products. “While audio is generally streamed at a lower bitrate than video, users often stream audio for hours at a time – consuming significant network bandwidth. Furthermore, quality assurance is hugely important, as users are extremely sensitive to stalling in audio streams. Rocket Optimizer’s audio optimization saves bandwidth where it is needed, while improving the overall consumer experience.”