Over 50 million people are now using Opera Mini browser to go online in India, according to the latest statistics released by Opera Software. With this, Opera Mini is now the third largest mobile app used in India after Facebook and Whatsapp.* 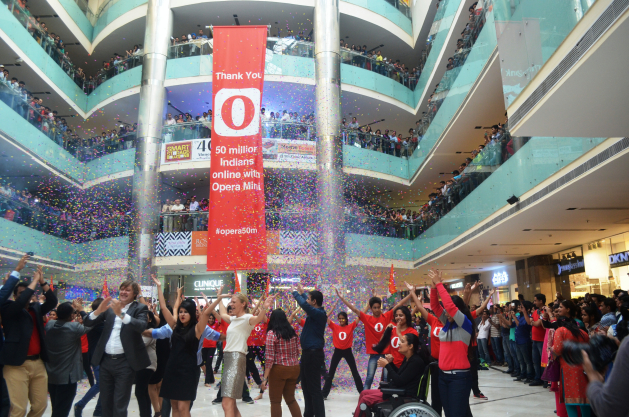 Opera’s CEO Lars Boilesen announced the 50-million-user landmark on Sunday at a flash mob in India. He joined 50 dancers in a fun Bollywood dance, taking people by surprise at a mall near New Delhi. He also met with Opera users at a party later that evening.

“India is such a colorful place and I’m so excited to be here. Our 50 million user milestone certainly calls for a celebration – India style!,” says Boilesen.

Largest number of Opera Mini users in the world

India is home to the largest population of Opera Mini users in the world, according to Opera statistics. Opera Mini shrinks webpages by as much as 90%, helping people browse more for the same money. It also renders webpages faster, making Opera Mini a great companion while on the go, especially in places with poor network conditions.

Opera Mini’s compression technology and low RAM requirements make it a hit on handsets used in India. In all, 16 Indian handset manufacturers have already preinstalled Opera Mini in over 350 models of Android devices available in the market.

“The internet has the power to transform lives, and we want everyone to have access to it. That’s why our browsers are designed to work on almost any internet-enabled device and in the toughest network conditions,” says Lars Boilesen, CEO of Opera Software.

“Opera Mini’s famous compression technology, which makes browsing faster and helps users cut down on their data costs, is extremely relevant for India. It feels fantastic to be embraced by so many Indians, and I’m confident that India will play a key role in Opera’s global vision of bringing the next billion people online,” adds Boilesen.

Smartphone users spike up: In India, the number of Opera’s smartphone users grew by 110% over the past year and now account for 50% of Opera’s total user base. These user numbers are spread across Opera’s portfolio of browsers, including Opera Mini and Opera’s high-end smartphone browsers – Opera Coast for iOS devices and Opera for Android.

Opera browsers at a glance

Opera Mini: Works on devices across the most popular mobile platforms, including Java, Android, BlackBerry, Windows, iOS and, most recently, Tizen. Opera Mini 9 for iOS is the first browser to integrate video boost, which optimizes videos and brings down buffering time.

Opera for Android: A powerful, one-stop browser for Android devices. It also offers data-saving compression, and its Discover feature integrates news feeds from the best websites in the world, across categories like entertainment, sports, technology and more.

Opera Coast: A stylish browser for iOS. It breaks away from typical web browsers with its fresh interface, intuitive swipe gestures and futuristic looks.