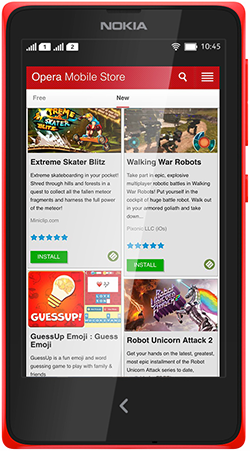 Beginning in the first quarter of 2015, people who access Nokia Store from Series 40, Series 60, Symbian, Asha and Nokia X devices will be automatically redirected to Opera Mobile Store, where they will be offered the opportunity to become customers of Opera Mobile Store and have access to tens of thousands of apps for their Nokia phones.

“We continue to sell and support classic Nokia devices, which remain popular in many parts of the world,” said Rich Bernardo, Vice President, Phones, Microsoft. “We’re delighted to partner with Opera Software and continue to provide a reliable app store experience for consumers and developers alike.”

“When the current users of the Nokia Store are migrated to Opera Mobile Store, they will continue to get fresh, interesting apps for their Nokia phones,” says Lars Boilesen, CEO of Opera Software. “The Opera Mobile Store becomes an even more significant player in the app store market, and Nokia mobile phone users get a first-class app store for years to come.”

App store trusted around the world

When the transition of customers from the Nokia Store to the Opera Mobile Store is complete, Opera is positioned to become the third largest app store in terms of downloads.

With close to 300,000 apps and games available in the store today, and millions of downloads each day, the Opera Mobile Store has a wide reach for developers looking to distribute apps.

Opera Mobile Store today supports more than 7,500 different devices, from feature phones to the most advanced smartphones. It is a trusted platform used by more than 40,000 developers around the world.

Developers looking to publish apps on the Opera Mobile Store can do so by visiting apps.opera.com.

The announcement follows a separate agreement, announced in August 2014, which will see Opera become the default browser on Nokia-branded phones, including Series 30+, Series 40, Asha and Nokia X handsets.