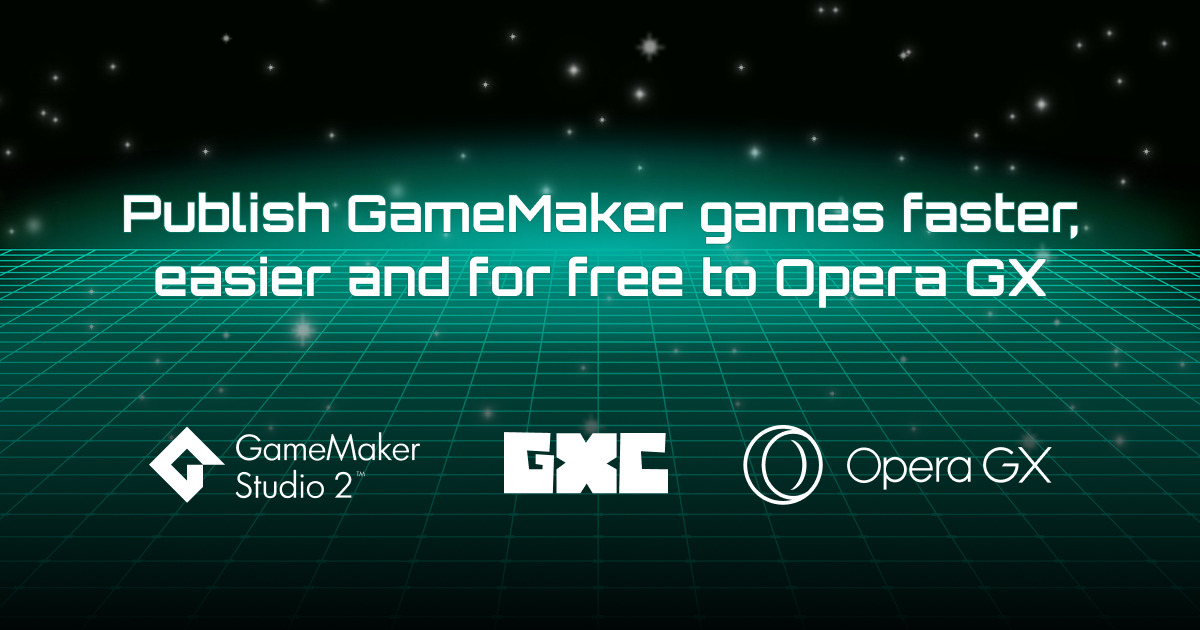 The company is launching a new self publishing platform named GXC. GXC will provide game creators with faster feedback for early stage games as well as with 1-click publishing from GameMaker Studio, to Opera GX’s growing gaming community. Game creators can join an early bird competition with a $45K prize pool for the best submitted games.

Oslo, Norway, Dundee Scotland, – Opera today made the next move in the gaming world, opening up its new free self publishing platform GXC to game creators. This move builds upon the success of the fast growing community of Opera GX users and follows the recent licensing model change making it free to develop games using GameMaker Studio 2. Game creators can now also publish their games to Opera GX.This enables creators to faster build and gain feedback from a highly engaged audience.

“Since we made GameMaker Studio free to use this summer, we have seen a surge in interest more than triple the amount of new downloads. Now we want to take the next step by enabling game creators to quickly validate ideas for their new games, shortening time to market” said Krystian Kolondra, EVP Browser and Gaming. “From today, creators can immediately start publishing content that will soon reach millions of Opera GX users”.

The Community Showcase Competition is aimed at creators of existing games made with GameMaker. These creators can now export their games directly from GameMaker Studio 2 to GXC for the chance to win one of forty-five $1,000 prizes in nine categories (Best Action, Best Arcade, Best Platformer, Best Puzzle, Best Multiplayer, Best Art Direction, Best Soundtrack, Best Level Design, and Most Engaging).

Game creators are allowed to keep tweaking their games during the competition. The jury consists of the GameMaker and Opera GX teams with Russell Kay, Head of GameMaker and Maciej Kocemba, Head of Opera GX taking the lead. The competition opens today and will be open for submissions until October 21.

“With our competition, we want to encourage all the creators from the GameMaker community to submit their work and become the first ones to reach Opera GX users through the GXC platform,” said Russell Kay.

In order to submit a game, open GameMaker Studio 2 and choose your favorite project, then select the “Opera GX” target and start the upload process with the click of a button, add your game details and you’re ready to go.

GXC is the next step for Opera Gaming

Opera established Opera Gaming to build synergies between the world’s first browser for gamers, Opera GX, and the GameMaker Studio 2 game development engine, as well as to work on new ventures in the gaming space. Currently launched in beta, GXC will be the first instance of this synergy, connecting indie game developers with the fast growing Opera GX audience of more than 10 million gamers. The platform will enter a beta stage in the coming weeks and will then become open to a wider audience.

Since its inception in 2019, Opera GX has quickly become the browser of choice for millions of gamers seeking a better internet experience. Along with countless customization options including color themes, sound effects, background music, and a gaming-inspired design, GX includes CPU, RAM and Network Bandwidth limiters that make the browser less resource-hungry and leave more of the computer’s resources for gaming. The browser also includes a Hot Tabs Killer feature, which lets users “kill” the most resource-draining tabs and GX Cleaner to purge those old unwanted files. Opera GX launched its own Discord server which now has more than 450k members. In June 2021, Opera GX became available on mobile devices as the world’s first mobile browser designed for gamers.

The GameMaker family of products has been downloaded more than 10 million times since 2012. Based in Dundee, Scotland, Game Maker Studio 2 is offered by YoYo Games, which was acquired by Opera and became part of Opera Gaming in January 2021.